During last Friday’s commencement, Laurel High principal Rhiannon O’Neal told members of the class of 2022 that the pandemic taught them the importance of having a community of support. Laurel Superintendent Dr. Shawn Larrimore gave them one final lesson, about how responses to events make up most of the outcomes they will experience in life.

“These people, the ones that were there, those people were your community,” O’Neal said of friends and family who were there for the graduates during the pandemic. “If the pandemic taught us anything, it’s that we needed that connection.” 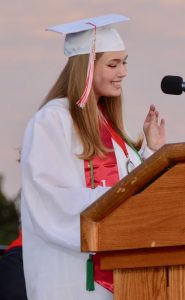 Valedictorian Dakota Hickerson speaks about the importance of prioritizing healthy relationships during her speech. Photo by Mike McClure

O’Neal, who started at the high school when the class of 2022 did, four years ago, urged the class members to be that community for others.

“The past two and a half years have not been easy but together you persevered, that is community,” said O’Neal. “As you move out into the world, I challenge you to be the community that others need.”

Larrimore acknowledged class of 1972 member Clyde Selby who is retiring after 37 years as a bus driver and contractor in the district.

Members of the class of 1972, which is celebrating its 50th anniversary, were also recognized during the ceremony.

Larrimore told the soon-to-be graduates that event plus response equals outcome, that events do not equal outcomes.

“The responses you make in life make up 90 percent of the outcomes you experience in life. Better responses lead to better outcomes,” said Larrimore.

Hickerson said she worked for the past four years to become valedictorian. She added that she, like other class members, faced stress during that time and spiraled mentally, emotionally, and physically.

“I have learned such a valuable lesson that I will continue to apply to the rest of my life. The key to life is to prioritize healthy relationships with people that you love,” she said. “Life is better with people than without.”

The co-salutatorians, Cannon and Givans, have been best friends since middle school and do everything together, including writing and presenting their speech.

“We know each other better than we know ourselves,” Givans said.

“A good friend is like a four-leaf clover, hard to find and lucky to have,” added Cannon.

The class, which has 161 members, was then presented with its diplomas. The family of classmate Tyree Lewis, who died in 2020, was also recognized. An empty chair with a gown over it sat with the graduates in memory of Lewis.

Class officers President Ashlynn Toppin, Vice President Jamir Giles, and Secretary Dakota Hickerson presented the class gift at the end of the ceremony. Citing difficulty for classes to raise money during COVID, the class donated the remainder of its money to the class of 2023 for next year’s prom.