The Laurel School Board recognized the Laurel High School band during last Wednesday’s meeting. The board was also updated by Superintendent Dr. Shawn Larrimore on a pair of proposals that will be made next month.

Larrimore said the Laurel band is the only competitive marching band in Sussex County. The 50 plus member band finished first and was a fan favorite at the Lake Forest tournament and scored a team-high 80.1 points at the Appoquinimink tournament of bands. 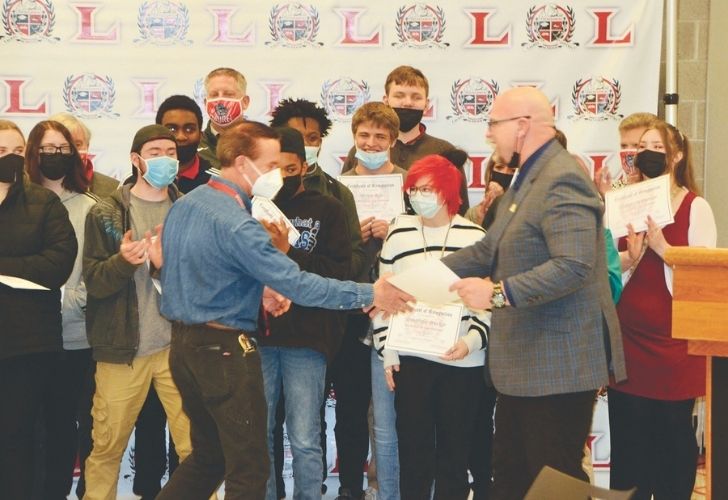 “The biggest accomplishment of this band that I’ve seen is that you are a family,” said Larrimore. “You guys are the epitome of what it takes to be a Laurel Bulldog and we’re so very proud of you.”

“They function like a family,” band director Jason Rogers added. “All the leaders know what their roles are. This season was successful because of every single person here.”

During board participation, board member Brent Nichols said, “These are good kids and we’re blessed to have them.” He rode with the band to a football game.

Larrimore updated the board and those in attendance at last week’s meeting about a letter he sent to families of fifth graders about the proposed reconfiguring of Laurel Elementary School (see letter on page 34). According to Larrimore, the middle school and high school is at 102 percent capacity (70 students over the 1,400 students it was built for). The elementary school is at 78-79 percent capacity and would be at 92 percent if sixth graders attend the school.

The superintendent’s recommendation and the board’s vote will take place at the next school board meeting, on March 16.

Mandatory masks in schools will expire on March 31. Larrimore said that if there are no new COVID variants, his recommendation will be to make masks optional after March 31. The board will discuss the proposal at the March meeting.

Board President Linda Hitchens said Administrative Assistant Lori Lewis is retiring from the school district at the end of June. “We are certainly going to miss her. Whoever steps in your shoes has huge shoes to fill,” said Hitchens.