When Penn State plays against Utah at the Rose Bowl in Pasadena, Cal. on Jan. 2, there’s a Laurel man, who, with his wife, will cheer on one special player. That player is number 33, Dani Dennis-Sutton – a defensive end for the Penn State Nittany Lions. And the father of that young man – Dana Sutton – said it took a lot of hard work for this great payoff.

“It was hard, but he was prepared for it. Our sacrifice was great, but our reward was greater,” said the rightfully-so proud father. 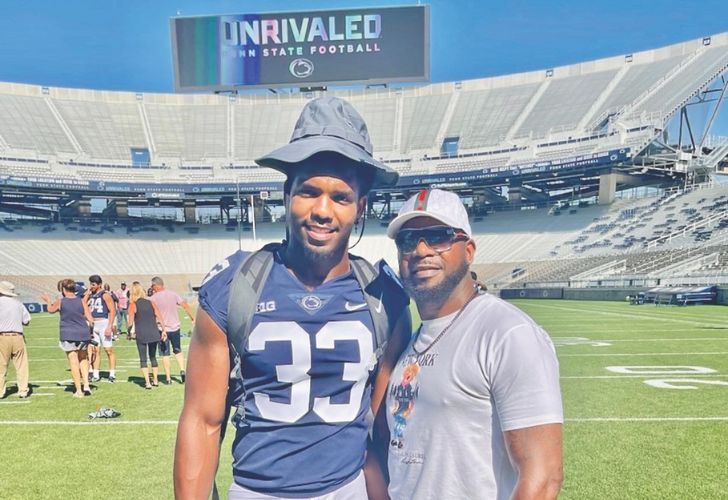 Dani’s story began in Laurel. The son of Tishion Dennis and Dana Sutton, the young Dani attended Laurel Elementary School. Unfortunately, the couple separated, and their son went to Millsboro Middle School. The young man’s parents may have separated as a couple before he hit middle school, but they were united in assuring that their son would be successful in life.

Dennis-Sutton excelled in basketball, whereupon, at age 12, he tried out for NBA great Kevin Durant’s “Team Durant AAU” travel basketball team. He made the team and excelled. His parents faithfully showed up to his games, and drove him to his tournaments. His skills caught the eye of many prep schools in the Washington, D.C./Maryland area.

As a family, they decided to allow their son to attend McDonogh Preparatory School in Owings Mills, Md. Dani earned a scholarship to the $40,000 a year school. The hardest part for the young man’s parents was that their son would be living at the school.

“It was hard to be separated from him, but it was a chance of a lifetime,” explained Sutton. “We saw him every single weekend. His mother would pick him up on Fridays, and after church, we’d take Dani back to the school on Sunday.”

It was at the school that Dani discovered his love and dexterity for football. By the time he was a senior, Dennis-Sutton was ranked 11th in the country when it came to defensive ends. According to Sutton, while his son was still in high school it was predicted that the young man would eventually be picked in second round of the NFL draft if Dennis-Sutton’s trajectory continues the way it began in high school.

While in high school, Dennis-Sutton was invited to play in San Antonio, Texas at the AlamoDome for the High School All-American Bowl Game. His mother watched him play. Then, two weeks later, Dana and his wife Lisa flew to Honolulu, Hawaii to see Dani play at the Polynesian Hawaiian Bowl. Both were bowl games comprised of the best football players in the country.

“It was good to go to Hawaii,” said Sutton, “but to hear people – strangers – from across the country cheering my son’s name… well, that is a feeling I’ll never forget.”

Also, for Dennis-Sutton’s first game of his last year of high school, Sutton rented a coach bus to allow others to watch his son play. He had to charge a fee to cover the cost of the bus and the driver; it filled up within two days. Fifty-six people showed up at the high school football game to cheer on the young man. “The coach said nobody ever did that for one kid,” Sutton noted.

The young man also kept his studies up, and was offered scholarships to such places as Alabama State (“We’ve been to the coach’s house,” said Sutton), Notre Dame and Penn State. “You don’t get 40 college scholarships offered to you being average,” said Sutton.

Dani Dennis-Sutton eventually chose “Happy Valley” to play as number 33, defensive end for the Nittany Lions. Educationally, he is doing well, with a 3.2 average. He is taking up business. Dennis-Sutton hopes to make it to the NFL eventually. Currently, he has a clothing line through Penn State’s college shop. Hopefully, following an NFL career, he wishes to open his own gym. As a freshman, he has led the team in sacks for Penn State.

As Dani played his first season at Penn State, Dana made a point to make the trek to Central Pa. to catch all of his son’s home games.

“Dani has really grown into his own. He loves kids. I like to watch him after he comes out of the locker room. He interacts with kids, grown-ups, teachers, and signs autographs for fans, Penn State students; he gives his playing gloves away to kids. Just to see the joy on people’s faces. He wants to go back into the community and give back. He wants to give away food, clothing, etc.,” he said.

Sutton is a driver for D.A.R.T., and is a mentor at The Ark Resource Center in Laurel. What he wants the children to see, “This can be you. He’s no different from you, where he came from. Just his mind set is different. It’s been a strenuous, long journey since he was 12, playing basketball. Honestly, all of this started with him playing basketball. But we all had a plan. We had to sacrifice. This can be you, if you want to be different. Instead of video games, train. Instead of movies or the mall, study instead,” Sutton said.