Three members of Laurel staff were part of 1991 championship team

For the first time since 1991, the Laurel High School football team has won a state championship. Three members of the coaching staff were members of that team. 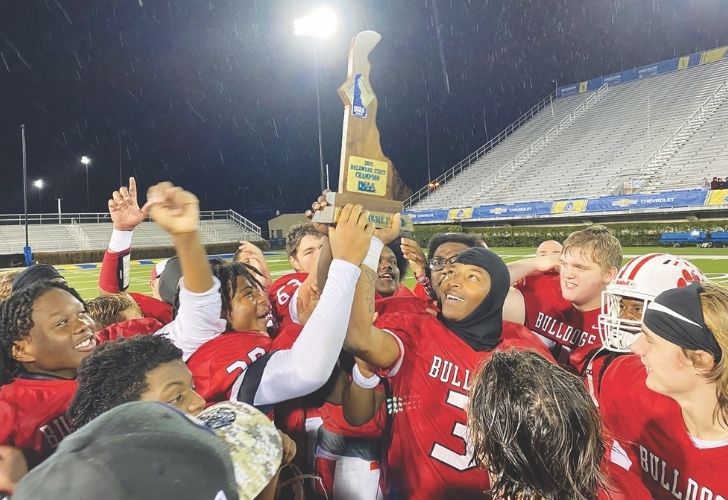 Members of the Laurel varsity football team raise the 1A state championship trophy in the air in celebration of their 28-14 win over St. Elizabeth last Saturday at the University of Delaware in Newark. The win marked the Bulldogs’ first state championship in 30 years. Photo by Mike McClure

“It means everything in the world. Those kids are great. I’ve been waiting for this for a long time,” said long time assistant coach Joey Deiter, who was part of that 1991 championship team, which topped Indian River and former coach Mike Norton, 29-2.

“The reason I came back (to coach) is I wanted you guys to feel the same things I felt,” assistant coach Brian Hearn, a freshman on the 1991 team, told the players after the game.

“It’s an amazing feeling, the best feeling,” said senior Jaden Snyder, who was joined by his father, Danny Snyder, who kept stats for the team. Danny Snyder was also a member of the last championship team.

“I’m the better athlete,” Jaden joked as he stood with his father.

As the game came to a close in Laurel’s 28-14 win over St. Elizabeth last Saturday night in Newark, the buckets of ice water were emptied on top of coaches Deiter and Hearn and head coach Joey Jones. The players also chanted Hearn’s and Dieter’s names prior to the presentation of the first place trophy.

“You set goals and you met them,” Jones told his team after the game. “This (trophy) will sit at Laurel High School forever, and you did that.”

In addition to the fans that braved the rain that poured most of the night, many Laurel community members joined the Laurel fire trucks in the Tyndall’s parking lot to meet the team busses and escort them through town late Saturday night in celebration of the Bulldogs’ first football state championship in 30 years.