The Laurel Bulldogs defeated Seaford, 40-12, in the annual Lions Club game last Friday night in Laurel. The annual football game, dating back to 1936, is one of the longest running rivalry games in the state of Delaware. This year is the 19th consecutive win for Laurel, beginning in 2004.

Coach Joey Jones who took over the Bulldogs in 2019 said, “It has been a fun week leading up to the game. Seaford came to play. They are not the team of recent years, those guys are playing good football and it brings life to this rivalry again.” 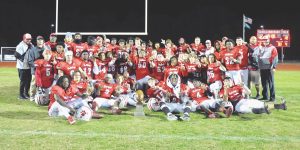 The Laurel Bulldog football team celebrates the 40-12 win over Seaford to keep the Lion’s Club trophy for the 19 consecutive year. Photo by Lynn Schofer

“He has been in the huddle for four years along with a couple of other guys who have been true varsity for four year starters (2019). You can’t replace kids who are pushing 40 varsity starts,” said Jones. “He is in a place where he is the smart quarterback. He is not a selfish guy and he is reading it properly. When you have a guy like Kylse Wilson who has had so much success, defensive coordinators have to pick sometime ‘who are we going to let beat us,’ It was Kaden’s turn and he has been ready for it and it’s truly fun to coach him.”

Seaford’s Zach Holmes tackle on Laurel in the backfield was voided when Wilson took a toss from Kaden Shockley for a 50-yard run to the 27 yard-line. Junior Patrick Belle and Wilson added another first down and Laurel moved the ball to the five yard line. The Blue Jay defense held the line and after four plays, took over possession of the football after stopping the Bulldogs at the one yard-line.

Blue Jays quarterback Careen Bolden dropped back on a third down pass play and went unprotected as the offensive line collapsed under the pressure of Laurel and he was tackled in the end zone for a safety and a two point lead for Laurel.

Laurel took a 9-0 lead with four minutes to play in the first quarter when Shockley optioned and kept the ball to run 48 yards for the touchdown. Shockley said of the read option plays in the game, “It is tricky, they (Seaford) keyed on one person tonight and that gave me the opportunity to run the ball.”

Seaford’s Jazonte Levan, who fought for every yard in the game, gave the Blue Jays a first down on a fourth down play to the 33 yard-line, but the possession ended in a punt with Laurel taking over at its own 17 yard-line. Laurel moved the ball 10 yards and Shockley once again faked the Seaford defense and ran 73 yards for a Bulldogs’ touchdown.

“We have great chemistry,” Shockley said when speaking of himself and senior running back Kylse Wilson, “he knows when I am going to give it or pull and it works out.”

Shockley also makes great reads as a defensive player. He pulled in an interception at the 28 yard-line on a pass by Bolden.

Neither team converted and punted on their next few possessions, but in the final moments of the first half Laurel scored after a face mask penalty moved the ball to inside the red zone. Wilson captured a touchdown and an extra point gave the Bulldogs a 23-0 lead.

The Blue Jays began the possession at the 33 yard-line and after a three yard gain, Levan busted through the middle and once he was in open field was uncatchable for the 70- yard touchdown run. The Blue Jays’ two point attempt was stopped for a 23-6 score. There would be two more scores before the final minute expired in the first half. Wilson showed his own athleticism and ran the ball to the 25 yard- line. The Blue Jays suffered a 15-yard penalty on the play and Laurel was awarded first and goal. The Bulldogs eventually settled for a 24-yard field goal by kicker Mike Gonzalez-Perez.

Seaford lined up expecting an onside kick and Laurel kicked the ball right into the belly of Holmes who held on, tucked it, and ran to the end zone. Levan was denied the two points and the half-time score was 26-12.

In the second half, the Bulldogs forced an early turnover that kept the Blue Jays out of the end zone and instead led to a 49-yard running touchdown by Laurel’s Tate Walls for a 33-12 lead.

“We drew up how to block on all of our plays differently at half-time and the first play was a touchdown. It is their ability to be coached. We are getting really good information from the players and at a high school level that is rare and makes my job fun. They are both smart enough and physically capable of making changes on the spot,” said Jones.

In the fourth quarter, Bolden was out on concussion protocol and James McNeill stepped into the role of quarterback. Laurel scored when following a high snap on a Seaford punt. Laurel took possession at the 15 yard-line. Shockley took his team to the four yard-line and then Tyronn Kane finished it with a touchdown to the right side of the end zone for the 40-12 score.

The Blue Jays and Bulldogs played out the rest of the quarter denying each other the end zone and Laurel captured the win and the Lions trophy.

“This is a special year because we have to run it back to the championship,” Jones said. “The people in your backyard are supposed to be close and the south is battling it again and it is a lot of fun. Tonight’s score does not reflect the battle that it was on the field tonight.”

Coach Jones said of his players, “They know how to talk to me on the sideline as to what they are seeing and calling plays is a group effort.”

Shockley said, “We, as a team, have to keep coming to practice and keep working. We have more games to win and we want that championship.”

“Laurel is well coached and is a great team. If you want to be big dogs, you have to play big dogs. Our program will look at the positives in Friday’s game and will improve on our mistakes.  There is still a lot of football to be played,” said Seaford head coach Mark Quillin.

The Bulldogs finished with 438 total yards to Seaford’s 112.