On paper, Trap Pond was not segregated in the mid-1900s but those who lived in the area at the time know otherwise. Jason Beach, later known as Cypress Point after the Civil Rights Act of 1964 desegregated the park, was where African Americans from Sussex County and beyond went to have picnics, dance, socialize, and hold baptisms and other religious ceremonies.

“We used to say ‘I wonder if the white kids are having as much fun as we are’,” Laurel Councilman Jonathan Kellam said during Monday’s historic marker dedication at Jason Beach. 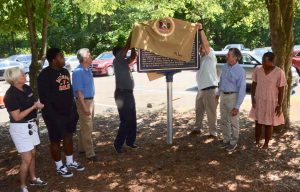 The ceremony took place in the first year that Juneteenth, the celebration of the end of slavery, was celebrated as a state and national holiday. With the dedication of the marker, the name of the area is now once again Jason Beach in honor of Dr. William C. Jason, the second and longest-serving president of Delaware State University.

“Juneteenth is an opportunity to celebrate Americans and Delawareans of African American descent. It’s an important opportunity for us to understand the history. Without that history we would have lost the significance of this site,” said Governor John Carney.

Delaware Department of Natural Resources and Environmental Control Secretary Shawn M. Garvin announced that information boards are up in the Jason Beach area with information and memories from the time when the area was where African-Americans hung out during segregation.

Kellam, who was baptized as a kid at Jason Beach, said he eventually got to know the white kids in his class when they were classmates, including Jeff Gordy, who passed away last week. The pair served as coaches when they were older and were friends.

“I thank God that we moved forward and are moving forward. It goes to show we can be one with each other,” Kellam said. “We (local group One Laurel) believe if we can be one Laurel we can be one county and one state.”

While he acknowledged that different generations had different memories of Jason Beach, he enjoyed his time there.

“I had a good time. I still think we can have a great time here,” said Kellam.

“All of our history is not always pretty,” Rep. Tim Dukes said. Dukes contributed $2,575 for the fabrication and installation of the Division of Public Archives Jason Beach Historical Marker.

The DNREC Division of Parks and Recreation made $70,000 in renovations to the Jason Beach facilities, including improvements to the historic restroom and repairs to the parking lot.

“The history of Jason Beach needs to be preserved and told, and that has been the aim of DNREC’s Division of Parks and Recreation team for quite some time,” Garvin said. “The ceremony to re-dedicate this area is the result of a large collaborative effort, including members of the community with personal connections to Jason Beach along with DNREC staff and volunteers who spent countless hours of research work to give the history of this special place the recognition it deserves.”

At the end of the ceremony, MERIT students and recent graduates Kianna Kelley and Jaden Burton followed Rep. Ruth Briggs King and shared their thoughts about the MERIT program and Jason Beach.

“MERIT really is a large part of where I am today,” said Kelley, who will attend Delaware State University in the fall. Like many people, her family came to Jason Beach to be with people who looked like them.

Burton recalled the memories of Jason Beach that his grandmother shared with him. She also shared some advice, “She said the color of your skin is a weapon. Either you’re going to get hurt or you’re going to make something of yourself,” he said. “They call this the United States but sometimes we separate ourselves as if we are not one.”

Before the unveiling of the historic marker, the Selby family shared their memories of Jason Beach and showed the group where the baseball field and concession stand were once located.

For more information about Jason Beach, including historical information, the oral histories and more, go to www.destateparks.com/CommunityHistories/JasonBeach.