Delaware Governor John Carney visited Laurel Elementary School last Thursday. The school uses about 80 percent of the district’s $500,000 in opportunity funding through a three-year program aimed at reaching students from low income families and English language learners. The visit was Carney’s sixth of six to district’s receiving the funding. 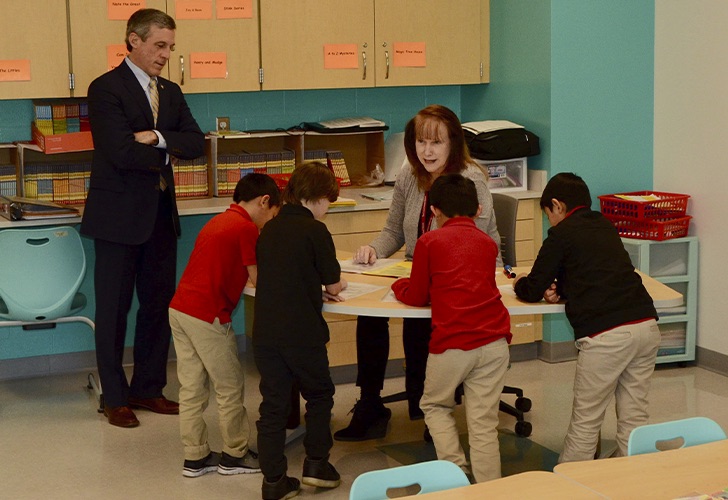 Carney, Rep. Tim Dukes, and Secretary of Education Susan Bunting visited three classrooms at the elementary school including one being led by Behavior Health Coordinator Jessica Nowacki. Opportunity funding provided the funding for this new position.

“This gives us an opportunity for us to bring in someone like Jessica and see what kind of impact it has,” said Laurel Assistant Superintendent Ashley Giska.

Carney said he would like to increase the funding as long as the state’s revenues continue to be strong and he has the support of the state’s legislators. An additional $3 million is included in his proposed budget for opportunity funding, which has provided $25 million in funding statewide.

Giska said the district would like to have a behavior health coordinator at the middle school/high school as well.

Governor Carney also mentioned the state’s Equalization funding, which aims to help poorer school districts such as Laurel. The formula for the funding is currently frozen.

“I think it (Equalization funding) could go further,” Carney told the Star during an interview following the visit to the Laurel Elementary School. “We ought to have a mechanism that works efficiently.”

The Chancery Court is currently looking at the reassessment of property values, with the judge expected to rule in March or April.

At the end of the Governor’s visit he presented a tribute to Laurel Middle School student Ka’Myre Snead, who performed the Heimlich maneuver to save the life of fellow student Ja’Monnie Farlow. He was familiar with the maneuver because he saw it on tv.

I’m thankful to him for saving me. I could have been a goner,” Farlow said.