While driving by Gateway Fellowship on Cannon Road, Bridgeville, you may spot a vibrant orange, metal donation container. It’s a new addition to Gateway Clothing Connection.

Since its humble beginnings during a “Thanksgiving for Thousands” outreach around 2008, it’s a ministry that has grown to include a “store” in the basement of the church and a traveling bus that dispenses gently used clothing to anyone who needs this service. 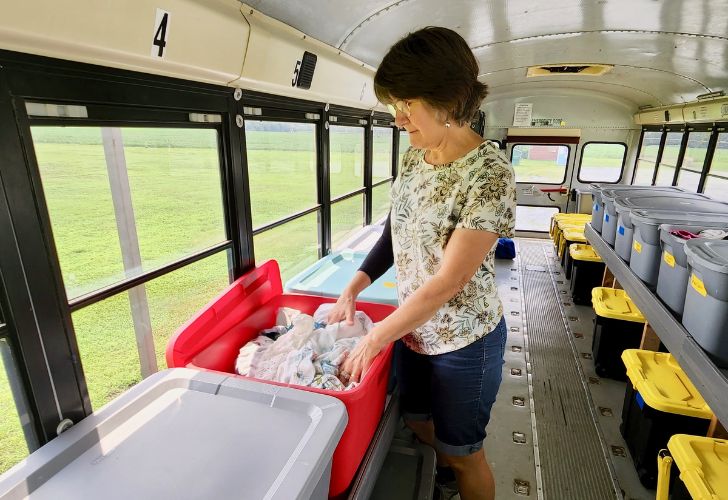 “We’re really pleased with this new, permanent structure,” said Carolyn Biggs, director of Gateway Clothing Connection. “It will allow us to take in clothing on a regular basis.

“Currently, we are low on donations for children’s sizes zero to seven, as well as men’s clothing – which is odd. We are in particular need of men’s sized small and medium, as well as jeans.

“When this all started, we were giving away gently used clothing in conjunction with ‘Thanksgiving for Thousands’ once a year. The big question when we started was, ‘Would we have enough clothing?’ We got to the point where we couldn’t see the floor for the clothing.”

When clothing arrives at Gateway Fellowship, it first gets separated into two categories: keep, or recycle. Clothing slated for the “store” or the clothing bus then gets placed in big, yellow laundry carts. A member of the church takes any donated clothing to their home and separates it according to size, season, as well as mens/womens or boys/girls. Sizes of clothing range from infant and toddler’s zero to two, up to and including plus sizes.

From there, the clothing is brought back to the church, where they are either placed in seasonal totes, or hung up on hangers for display by the all-volunteer group of those dedicated to this ministry. Before they begin their day, volunteers first meet in the prayer room and pray for guidance.

“A lot of people are struggling with hope and fear,” Biggs said. “To me, when we share these clothes, we are sharing God’s love and hope.”

She then shared a story about what she called, “God’s provision and timing.” Biggs had noticed a pair of donated non-skid shoes. She kept them back, thinking she would take them on an outreach somewhere, possibly for an elderly woman. The shoes were held back for about a year when Carolyn remembered to put them out on display in the store.

Within a week, a woman who acquired employment, went to the Clothing Connection, hoping to find what she needed for her new job. What she needed was a pair of non-skid shoes, the exact size and color that Mrs. Biggs put out on display just that week.

Part of that provision includes their Clothing Giveaway Bus. That project started in 2019 after the church realized they had more clothing than guests. So, various volunteers loaded totes filled with clothing to Walker’s Mill Trailer Park. More than 50 families showed up that day, which they considered to be “an instant success.”

However, that experience left everyone exhausted. “So, we prayed about it,” Biggs related. “A friend happened to have a bus he needed to get rid of in 2021. With good advice, we transformed the bus into a traveling clothing connection and took it out. We operate the Clothing Giveaway Bus once a month between the months of March through November.”

This year alone, the bus has distributed free clothing at housing developments, as well as at events such as Nanticoke Riverfest and Georgetown La Red Community Day. They will be at a local mobile home park in August, as well as the A.C.E. Peer Center in Georgetown on their Hair Cut Day. They ask the public to find out more about dates, places and times on their Facebook page, Gateway Clothing Connection.

It’s an impressive and organized set-up on the bus, where they allow approximately six people on the bus to peruse the clothing at a time. They are arranged by size in the totes. Soon, the bus and store will switch from summer items to fall and winter clothing.

The store itself carries shoes, coats, underwear, and bedding, in addition to clothing. They also have belts, pocketbooks and other clothing accessories. Gateway Clothing Connection is open twice a month: the second Thursday between 1 and 4 p.m., and fourth Saturday of each month from 10 a.m. till 2 p.m. There are exceptions to these hours on certain holidays.

Biggs stated on those days, enter the front basement doors. At the end of the stairs, you will be asked for the names, birthdays and address of all in the household. They do not track income of those who peruse the store. She noted that a lot of those who “shop” with the clothing connection also donate to them.

“We exist to help the community,” said Biggs. One way that their ministry can help benefit others is for the public to donate gently used, clean clothing. Also, they accept monetary donations to help with expenses such as gas and bus maintenance, bags for guests and outdoor flags. Monetary donations can be sent to Gateway Fellowship, 8110 Cannon Road, Bridgeville, DE 19933 earmarked, “Clothing Connection.”