Father Jim Manion returns to St. Philips Episcopal after serving the church in the ‘70s

When St. Philips Episcopal Church in Laurel needed a priest, Father Jim Manion received a call. Manion, who served as the church’s rector in the 1970s, couldn’t come up with many options to fill the church’s vacancy, then he was asked if he could fill the void. He thought about the offer and remembered the people who made sacrifices for the church.

“I said you’ve got to honor them and come back. They need help right now,” Manion recalled. “It’s a journey to come back and honor people.” 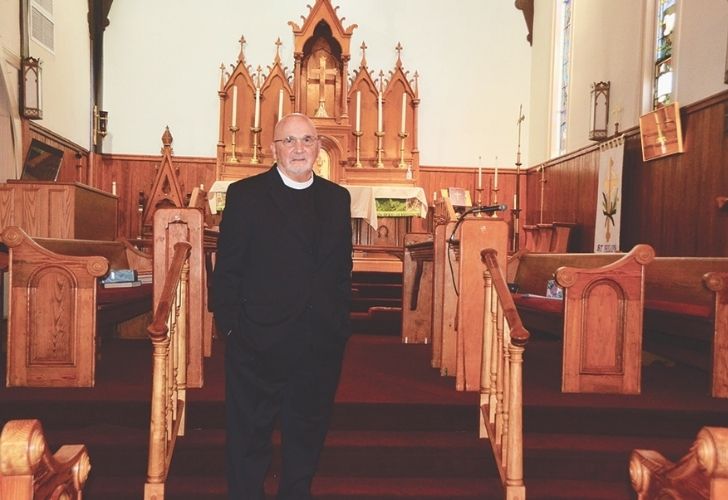 Father Jim Manion returns as pastor of St. Philips Episcopal Church in Laurel, a church he served for five years in the 1970s. Photo by Mike McClure

According to St. Philips Senior Warden Suzanne Johnson, Manion was known as the people’s priest. He served as the church’s priest for five years and was known for visiting with Laurel residents and parishioners at the town’s downtown restaurants.

“I can visualize some of the people that once sat in those pews. It’s very nostalgic. The company of these people are to me still in the church, seated in those pews,” said Manion

St. Philips Episcopal Church had been without a priest for three years. Father Howard Backus, who had been filling in, left at the end of the year.

Johnson’s husband, Martin, gave Manion a call to get ideas for a possible replacement. Then he suggested that Manion come back. Normally, priests do not go back to churches they once served, but St. Philips was able to get permission to bring Manion back once he agreed to it.

“We felt a special hand that was watching over us that brought Jim back to us,” Suzanne Johnson said.

Aside from being known as a people’s priest, Manion is also known for his sense of humor. While serving at St. Philips the first time, he asked parishioners to say a prayer for his favorite football team, the Cleveland Browns. He was joking, but three ladies lined up in the pews and prayed for the Browns.

Manion said weeks later one of the ladies came up to him and said, “I read the sports page, our team’s doing better.” He added that it was probably the first time she had looked at the sports page.

Manion also likes to get his church members interested in the Kentucky Derby. He was born in Ohio, but was raised in Kentucky.

“Church is supposed to be a place of prayer and love but also fun and joy. That’s what I try to accomplish,” said Manion.

“I think a mark of a Christian is how much joy does he have in his heart.”

Manion said that in the world today with COVID and political animosity, fun and joy are needed now more than ever.

“It seems like brother against brother,” he said. “We just need to bring back a semblance of life and enjoying humanity.”

When he was first ordained he went to a large church. While there, he was given some advice: “Tell them you love them and God loves them and see what happens.”

“I really didn’t know what a small town was like. Here I met new people, saw how they related to one another, how they cared about each other,” said Manion. “I learned from the Christians about how they faced life.”

Manion remembers how vibrant Laurel was in the 1970s. He didn’t want to see St. Philips join the list of past businesses and organizations that once were.

“I don’t want to see this place (church) evaporate,” Manion said. “Businesses come and go but this place can not go.”

“This place just exudes history. I would like to see a renaissance take place here,” said Manion. “This place has been the heartbeat of the community.”

Manion recalled how Father Barber served the church during the depression. He started a food bank, which the church has continued. He would go to George Spicer’s grocery story and get food for the needy. The senior center was also established at the church.

When Manion was at St. Philips in the 70s, the church’s rectory was located on the corner. People would come to him with their problems. “The welcome mat was always out,” he recalled.

“The place has always been linked to the community and how can we serve, how can we make things better,” said Manion. “We reach out in the Christian atmosphere of love and service. We do it because we are motivated by our God to serve.”

Manion remembers how Dr. Pierce Ellis would help people who couldn’t afford his care. He remembers all of the clothing stores and restaurants that once inhabited the town’s streets and is hopeful that the town will experience a renaissance.