The third story in Seaford/Laurel Star series on local high school football teams takes us to Georgetown with the Sussex Tech Raven football program and head coach Bradley Ellingsworth. The Ravens’ new coach said his first year is unprecedented but he lives his life always with the glass half full.

“Once I officially became coach in mid-April the school was already closed. I coached as an assistant last year and know the kids in the program,” Ellingsworth said. 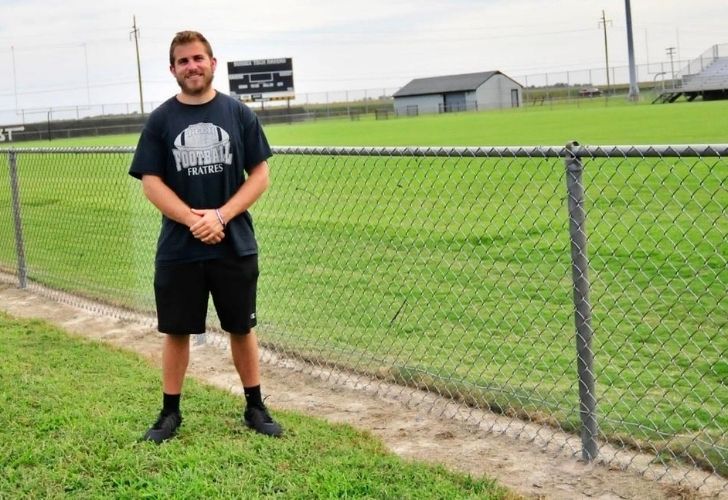 Sussex Tech football coach Bradley Ellingsworth’s first season as head coach is filled with challenges but the Raven alumnus stands ready and is working to prepare the team for the first night of football in February 2021. Photo by Lynn Schofer

Coach Ellingsworth gathered his coaches to prepare for the summer. “Once hired it was still the switching of hands so I started a Facebook group, private Instagram, and Schoology (the program used by the district) group. If you aren’t able to operate social media as a coach it is tough,” he said.

New to his staff is Ryan Doherty, who will be the head JV coach. Important to coach Ellingsworth are alumni staff members who are: Jack Retterford (DB/WR), Kani Kane (RB, LB), and TJ Eley (OL/ DL). Ellingsworth is the offensive coordinator.

“It is important to me to bring in alumni. Every town has guys who played there and shared the pride and I feel like this is the first time that they can hear from a coach who was right here where they are at right now.”

The Ravens also welcome Todd Baynum from Laurel as freshman head coach and his son, Zach Baynum, as well as Donnell Bridell to the freshman team coaching staff.

The Raven Nation will not light up the sky on Friday evening in September but will be hard at work preparing for February. “Once we were able to get all of the kids corralled on social media and especially on Schoology we were able to create two separate work out plans,” Ellingsworth said.

The coaches tailored two plans because they were unsure of what their players had access to in the summer. “We developed a 12-week calendar, a body weight program and the kids would send us videos of them,” said Ellingsworth.

As the state opened businesses, including gyms, some of the kids had access to those workouts and the staff began meeting online. “We started to have virtual position meetings with an agenda on offense and defense and the kids would sign on, use HUDL playbook and show new schemes and plays,” Ellingsworth said. “Attendance slipped as summer evolved, but thankfully we received approval from DIAA and the school then allowed outside conditioning to begin.”

Ellingsworth said he is grateful for the team work and enthusiasm of Sussex Tech Athletic Director Nick Pegelow and Trainer Heather Heidel, who organized and implemented the DIAA guidelines making the job easier for the coaches.

“We have 10 person pods and both fields set up,” said Ellingsworth, who added that cones keep everything defined and organized. “We break groups up 25 kids for one hour and they leave and another group comes in. We have touchless thermometers, phone scans a QR code and they answer the screening questions hit submit and it goes to a Google document.”

Ellingsworth said the commitment of the staff brings the kids back to the field, “We have good numbers and I am excited that 40-50 kids are showing up. Some parents are still uncomfortable and they know it is optional.” The weight room remains closed and coach Ellingsworth recognizes safety is important and supports Tech’s choice.

“I wouldn’t say it is intentionally putting any school at a competitive disadvantage but some schools I know are in the weight room four days a week, then there are schools that aren’t doing anything, it is definitely a mixed bag,” he said. “I was excited to get out here, I hadn’t been able to address the team in person. That was really the biggest thing to just being able to establish my culture and what I look for, my expectations, my routines.”

Coach Ellingsworth said he has one expectation, “They have to give me everything they got, if they can look themself in the mirror and look at me and honestly say I gave everything I got, then whatever is on that scoreboard doesn’t matter. If you came unprepared or had a bad week of practice that is unacceptable. We are going to have to outwork people each and every week.”

Ellingsworth said he holds himself to the same standard, “I am not going to promise wins and losses but as a coach I will give you everything I have.”

The fall season now becomes off-season and winter sports play into fall sports. “If we had no off-season and DIAA then told us we could play it would have been stressful. We are now able to be out here twice a week,” said Ellingsworth. “It is very important to bring us together and create the culture of our team and expectations and be ready to be out on the field. I think there are so many different components and the effect of the virus, the kids that play sports rely on it for social interaction and it improves mental health.”

Reflecting on his own playing days, Ellingsworth said he knows this is extremely difficult for some kids. “I know I looked forward to coming to school because I couldn’t wait to get into the weight room and to practice and to play the sport that I loved. Kids want to be doing something and parents want their kids doing something,” he said.

The layout of the seasons may prove to be beneficial, “I am not 100 percent sure how this will play out with basketball first, it is going to be very cold. I hope the wrestlers and basketball players get to have a season and maybe we can get some participation of kids who usually spend fall getting ready for winter sports and will want to try football,” said Ellingsworth.

Coach Ellingsworth and his staff have a lot of young blood on the Raven squad and he said his key returning players are expected to be the leaders, including Conor Ellingsworth, Ty Tucker, J.T. Harmon, and Ian Rieley. Ellingsworth said he has some underclassmen who worked hard as freshman last year. They include David DiCampli, Nic Rode, and Rich Boulden.

“We do not graduate many and will be able to glue together the future which is bright for Tech,” Ellingsworth said.

Ellingsworth said the Henlopen North Conference is dog fight each week. “Coach Quillin always said, and I agree, it is the best, most competitive conference in Delaware football. Everyone knows Smyrna and Sussex Central’s reputations and Dover has been a playoff team,” he said. “There are no weeks off and it is exciting to me. I like the challenge and part of the culture is to welcome that challenge. We want people to not like us.”

The 2020-21 Delaware High School football off-season is underway and coach Ellingsworth and his team are building a culture, redefining goals, and in difficult times keeping the glass half full.

“This time is very important and I think we can keep it rolling. It is a lot of communication and I am sure I annoy the parents sometimes but it is vital to keep parents informed,” said Ellingsworth. “The process has been extremely difficult to get the simplest things moving but seeing these kids out here makes it all worth it. I am ready for normalcy.”