Years ago, the Nylon Shopping Center in Seaford was hustling and bustling this time of year as area residents came to the center to do their Christmas shopping. It only seemed fitting that the announcement of the purchase and the redevelopment of the center was announced in front of the former Woolworth’s store last Tuesday, during the Christmas season.

“It (Seaford) was the place to be. Our school district was thriving, housing prices were going up,” Seaford Mayor David Genshaw recalled. 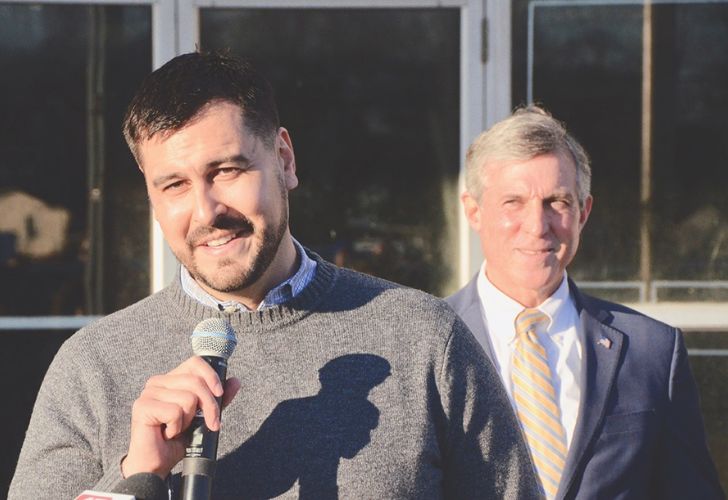 “I think it’s the right time of year that we’re doing this,” added Rep. Danny Short.

Developer Rob Herrera, a partner in Ninth Street Development Company, owners of The Mill in Wilmington, purchased the center after years of negotiation. The purchase was made thanks to a $5.1 million investment by the city ($3.1 million subsidy) and the state ($2 million). The completed project, with demolition and construction, is expected to cost $60 million.

The new center will include health care and education components, though Herrera wasn’t ready to announce future tenants. He did say that Delaware Tech will have 15,000 square feet for a workforce training center and his company, The Mill, will take up 20,000 to 30,000 square feet next to Del Tech.

Herrera said the developers plan to add trees and plants to the center’s parking area to make it more walkable. He called this human centric design.

“Humans like spaces that are built for humans and not for cars,” he said, adding that shopping centers in the U.S. typically have a 60 year lifespan.

Governor John Carney designated the center as an opportunity zone space in 2018.

“We need to promote prosperity in all areas in our state,” said Carney. “This is not the end, this is just the end of the beginning. We’ve got a lot of work to do but we have a great team and a great partnership.”

During Tuesday’s press conference, Genshaw spoke about how things went down hill in the center, from the crack problem in the 80s to jobs lost at the DuPont plant to retail businesses moving to the highway.

“People wanted to change, they wanted to do something (about the state of the shopping center),” Genshaw said. “Today is an incredible day and lots of people have been active in it.”

Past and current City Council members, administration, and mayors as well representatives from the Seaford School District and TidalHealth Nanticoke attended the conference. Genshaw also said that the state’s local representatives and the governor worked together to make the purchase possible following a four year process.

“We’re Democrats and Republicans for sure but we’re Delawareans first,” added Carney. “For me, I saw an opportunity for change.”

Rep. Short said the Nylon Capital Shopping Center was the state’s first ride about, as teens drove muscle cars through the shopping center. The town’s little league was also originally located on the site.

“It’s not just an economic development thing, there’s a lot of passion behind this,” said Short, whose wife worked at the Capital Pharmacy, where Sal’s is now located.

Senator Bryant Richardson thanked the city’s administration and Council for its hard work on the project. He added that prayer can change things.

Herrera and his friends started the Ninth Street Development Company on Ninth Street in Wilmington. The neighborhood, like the Nylon Capital Shopping Center, was once a vibrant corridor that began to decline.

“We just wanted a change in our community,” Herrera recalled. “This project (in Seaford) is a result of community leaders that demanded a change.”

“The private sector could not do this alone in any meaningful way,” said Herrera.

“We’re at the very beginning stages of something that’s going to be incredible,” Genshaw added.