The independent financial audit report came back “clean” for Delmar. UHY LLP, Certified Public Accountants representative Mark Welsh presented the highlights of the Fiscal Year 2022 (ending in June 2022) audit of the Delaware and Maryland towns, as well as the Utility Commission, to the Delmar, Del. Mayor and Council on Tuesday, Jan. 3.

Welsh noted that though depreciation plays a major role in the Utility Capital Assets numbers, they had a really great year and still ended with nearly $13 million in assets. He also noted that the town was not adding much debt but was continuing to pay it down, with $381,000 debt/capital leases on the Delaware side (most debt is in the public safety building, which is now paying more on the principal). 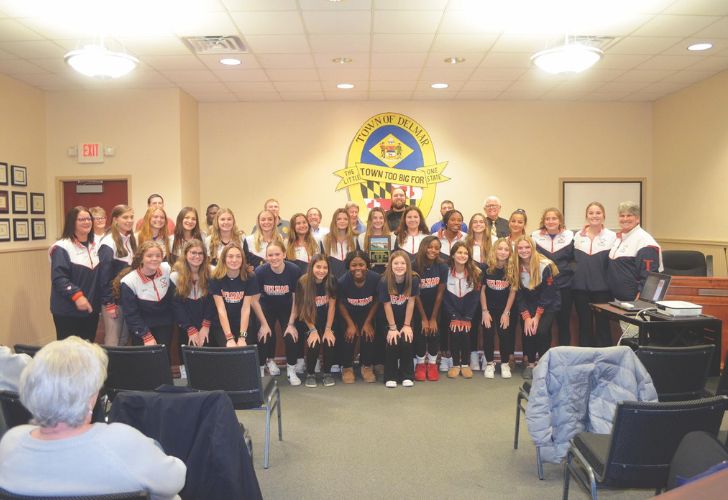 STATE CHAMPS- The seven time state champion Delmar field hockey team was honored by the town of Delmar during Monday night’s Delmar Commission meeting. The team is shown with members of the Commission and Council. Photo by Autumn Boothe

When asked why some of Delaware’s numbers jumped up in the last few years, Welsh explained that the donation of land by Perdue (a piece of property along Rt. 13 the company had purchased for $279,900 with intent of relocating its Agribusiness headquarters, a plan that ultimately fell through back in 2019) really increased the capital assets on the Delaware side.

Police Chief Ivan Barkley gave a briefing on the many new and upcoming additions to the Delmar Police Department. Two new officers will be sworn in on Friday, Jan. 27 at 1:30 p.m. in Camelot Hall (103 E. State Street, Delmar, Del.), and the public is invited. Town Manager Jeff Fleetwood encouraged residents to join, commenting that if the town can come together for a Friday night football game, it can come together for events like this.

In addition, Kimberly Rojas was recently brought in as the new Police Communications Officer (PCO). Two new recruits are entering the police academy, while the department prepares for the last open position to be filled and set to enter the Academy in June/July; Chief Barkley reported that they currently have 18 applicants for that position. This planned role will bring the total number of officers up to 16, but he is hopeful for more headcount next year.

With the increase in numbers comes the ability to be more proactive rather than reactive, the chief noted. There were more than 110 traffic stops last month, and Chief Barkley added that residents will be seeing more of a police presence in the town. There will also be a traffic study conducted on State Street around 8th Street (where the middle/high school is located), so residents can expect to see speed monitoring signs in the area.

The floor was given over to the owners of 4 Points Towing and Roadside Service, LLC, located at 36671 Sussex Hwy. in Delmar as they made a case for an annexation into town limits. Paul and Janet Kope, the owners, had purchased and cleaned up a garage and junkyard and have turned it into an auto-repair and towing company and plan to sell storage units as well. This is their second location, with the first being in Camden-Wyoming in Kent County. Janet explained that they purchased a house in Laurel but wanted to have their business in the town of Delmar and really be a part of and invest in the community.

Council member Linda Morris suggested that the owners look into Delmar’s Comprehensive Plan (which can be found on townofdelmar.us under Community Development) and use its language to strengthen their statement on why they should be a part of the town, as their reasoning needs to fit in with the town’s growth plan.

Town Manager Fleetwood also explained that there will be a well-advertised public hearing before any recommendation can be granted by the committee, so he advised them to prepare well for it. In the public comments, Janet Kope wanted to add that she was moved by the camaraderie, concern, and unity displayed. “I’ve always wanted to be part of a town that cares, and that’s hard to find. I think we’ve found it,” she said.