When it came to the Bridgeville seal and logo, the town manager and Commissioners agreed they didn’t need to start from scratch, they didn’t need to reinvent themselves; they just needed to condense and simplify. At last month’s meeting, Town Manager Bethany DeBussy presented a draft copy of the new Bridgeville seal and logo to the Commissioners. Now, it’s being released to the public. 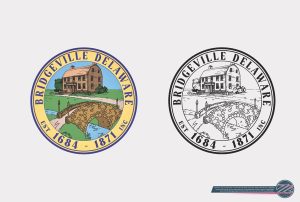 Shown is the town of Bridgeville’s seal.

The problem with the community brand, according to DeBussy, was it wasn’t cohesive. The logo would change, the characters in the seal “changed careers” over the years in different renditions of the seal. The old seal also featured holly leaves. A few years ago, a complete branding guide was created, yet never used. DeBussy showed the Commissioners in a presentation that it only needed some tweaking.

The town leaders decided to take the old seal, streamline it, and then modernized the graphics to present a sense of old-world charm. The prominent feature in the seal is the bridge leading to a rendition of the Sudler House – the oldest house in Bridgeville. The earliest portion of the house was built in 1750; it has been said that Lord Calvert’s Ambassador to surrounding Native American tribes from the Delaware River to the Chesapeake Bay may have been the owner of the house. The property was purchased in 1833 by Dr. John R. Sudler, a successful physician and farmer, after whom the home is now named.

The dates listed on the seal – 1684 and 1871 – state the dates that Bridgeville was first established and then incorporated. The leaders added “est” and “inc” to the seal to clarify those dates. As for the rest of the logo, Bridgeville combined what they had with a previous marketing campaign from several years ago – the color palette, font, and styling of the town of Bridgeville, with the tagline, “If you lived here, you would be home now.” DeBussy said they are going for consistent, cohesive branding, by changing the verbiage from “you’d” to “you would.”

DeBussy expressed the new logo and seal will soon be used for a lot of future projects. They will use the new branding for existing projects, such as Bridgeville’s website, letterhead, business cards, vehicle branding, newsletters, plus utility and property tax bills. They plan to use the new branding in upcoming projects such as banners, crosswalks and signal boxes, the municipal park, comprehensive plan updates, community events shirts, and more, as the occasions arise.

The new logo and seal was approved at last month’s Bridgeville Commission meeting. The final printing was completed recently.