On Feb. 4, 1922, Henry Ford purchased the Lincoln Motor Company from inventor and automotive engineer Henry Leland for $8 million. For a display at the 100th anniversary celebration in Dearborn, Mich., the Henry Ford Museum wanted a very specific model of a Lincoln Continental Mark V from the late 1970s. And the museum found one. It belongs to Delawarean Marilee Russell Bradley, whose 100th birthday, coincidentally, is this year, on Nov. 23.

Mrs. Bradley was born in Bridgeville, and her family’s history in Delaware dates back to the 1500s. One of her relatives was a cupbearer for William Penn, and there’s a land grant document in the family signed by Lord Baltimore in 1799, back when Bridgeville was part of Maryland. 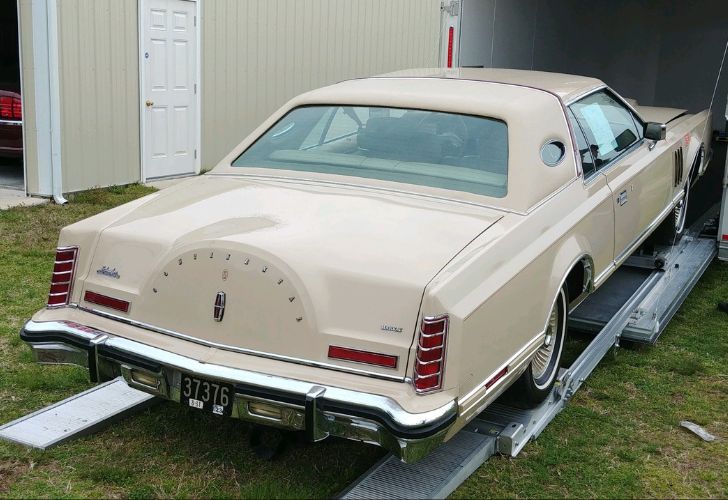 The 1979 Lincoln Continental Mark V Designer Series Cartier Edition is loaded onto a transporter to go to Dearborn, Mich.

Mrs. Bradley’s son, Mike, owner of Mike’s Clearance Center, has collected classic cars for 40 years and is on the board of directors of the Lincoln Owners Club, where he’s been a member since 1977. He was contacted by the president of the club who asked if his mother still had the car and could the Lincoln Motor Car Foundation borrow it for the display.

Mike’s father, Fulton Bradley, purchased the Lincoln Continental Mark V Designer Series Cartier Edition for his wife in October 1978, three years before he died. It was a 1979 model. The series had four designers — Cartier, Givenchy, Bill Blass and Emilio Pucci — each with his own choice of paint color, interior and roof. The Cartier edition, which sold for more than $16,000, was light champagne with a champagne interior.

“We’ve always been a Ford family,” Mike said. “My parents put me onto Lincolns. I’ve owned 100 cars and 85 to 90 of them have been Lincolns.” His first Lincoln, purchased when he was a junior in college, was a 1962 sedan.

Mrs. Bradley is now a resident of Lofland Park Center in Seaford, just a few blocks from Mike’s home. She no longer drives, Mike said, so he has “sort of been custodian” of the car, which was titled in her name until the mid-1990s.

“Mom is a colorful lady for 100,” he said. “My grandmother graduated from Goldey-Beacom College and was quite independent. She raised Mom to be the same. Mom has been very active in civic affairs. In 2014, she received a Lifetime Achievement Award from Delaware’s governor for her outstanding volunteer service.”

The car was picked up on March 31, by Ford’s exclusive shipper in an enclosed trailer and returned by Easter Sunday. Asked then if she remembered the car, Mrs. Bradley responded, “I should think I do!”

The car can be seen on display in Michigan six minutes into a YouTube video online at youtube.com/autos0to60.com/lincoln-100th-anniversary-archive-experience-at-the-henry-ford-museum/.