Community Players of Salisbury (CPOS), a long-standing community theater and non-profit organization, provides quality entertainment to the people of the Eastern Shore, connects and gives back to the region, and pushes forward each year to further enhance the surrounding community.

The 85-year-old institution has seen many changes and advancements, a number of which were ushered in with the pandemic and continues to thrive. 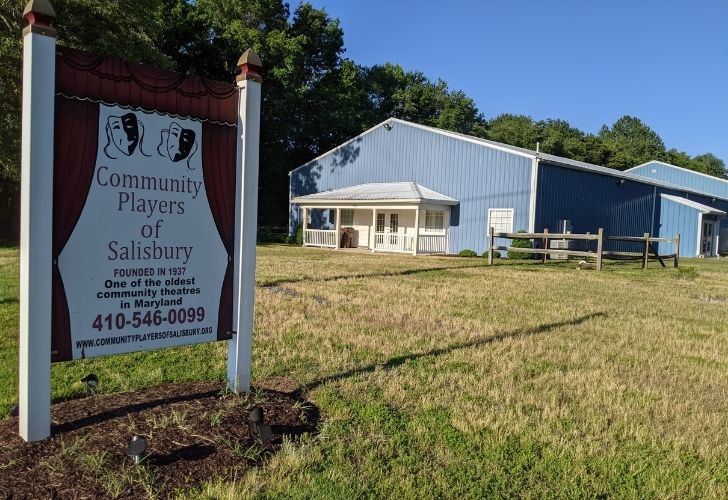 The 2021-2022 season for the Community Players of Salisbury opens this fall with Noises Off. The season will include a special fundraising concert to mark their 85th anniversary.

Community Players of Salisbury began in 1937, making it one of the oldest community theaters in Maryland in continuous operation. The original group of 26 charter members wanted to bring culture and entertainment to the local community and have an outlet for the dramatic arts.

In 1938, CPOS put on their first play, The Singapore Spider. Their first musical, Guys and Dolls, debuted in 1964. Over the years, the number of shows per season and combination of musicals and plays have varied. This year marks their 85th season.

Typically, CPOS showcases a four-show season that includes two musicals and two plays. A mixture of comedy and drama provides variety and offers something for everyone to enjoy. The 85th season will follow this formula with the addition of a special fundraising concert to mark the landmark anniversary featuring songs and scenes from shows Community Players have done in the past.

In addition to the anniversary event, the upcoming 2021-2022 season will include Noises Off in the fall, The 25th Annual Putnam County Spelling Bee in winter, Senior Follies in spring, and Jesus Christ Superstar in the summer. The latter two shows were slated for the spring and summer of 2020 until the pandemic brought changes.

Community Players board member, Shelbie Thompson, shared, “Over the summer during the pandemic, it caused Players to completely adapt their entire system.”

Adapt they did, moving to outdoor theater. Thompson says that providing theater in an outdoor setting was something of interest for CPOS and the pandemic gave them a nudge to make it a reality. Last summer, the organization fashioned a borrowed flat-bed into a stage in the open lot behind their Salisbury headquarters to create a drive-in experience, putting on four shows in four weekends where patrons remained in their vehicles and listened to the show via FM transmitter.

Safety was a top priority for each production and shows were chosen based on minimal cast size and ability to social distance. Though this show format was born out of necessity to continue providing entertainment to the community, Thompson says these “Weekends on the Lawn” will continue this year with plans for a children’s concert and more.

In addition to adding the new summer outdoor productions, CPOS has managed to get back to live, indoor productions as well. This past June they held performances of A Streetcar Named Desire at the James M. Bennett High School Auditorium.

Thompson commented on the return, “Getting back to the stage has been a process. They originally had the plan to stream A Streetcar Named Desire.”

Streaming a production was another first for the group. Streaming was done this past February for the show, Almost, Maine, which featured two-actor segments. For both shows, auditions, rehearsals, and performances followed safety precautions in the best interest of everyone involved.

The challenges brought on by the pandemic seem to have only further strengthened CPOS by proving they could expand their repertoire of mediums. “The pandemic pushed us out of our comfort zone, but led us in a great direction,” says Thompson.

Another direction the organization has been moving in is increasing their connection to the community and being fully representative of the Salisbury community as a whole. Players’ members can often be found at downtown Salisbury’s 3rd Friday events and at other notable local events in conjunction with places like the Ward Museum and historic Furnace Town.

They also help young thespians, offering a scholarship annually to two students who are considering theater as a college major. Connecting with other theater programs, including those in schools, CPOS offers rehearsal space and costumes. The group continues to seek new ways to further connect with the community.

Connecting with the community also means representing it. The organization’s statement on diversity declares, “Community Players is committed to celebrating an inclusive culture of creativity by welcoming actors, technicians, designers, musicians, and production team members from varied backgrounds — race, gender identity, ethnicity, and sexual orientation. People who have been involved with Community Players represent many different facets of our community, have a broad variety of occupations and lifestyles, but all come together for the common love of theater and wanting to provide quality live entertainment in Salisbury.”

Members of the community can also become members or patrons. “Community Players is more than just a community theater. We have people from all walks of life — teachers, doctors, students, real estate agents. All of these people come together for the common love of theater and to put a great performance on stage for the entertainment of our community,” says Thompson.