The countdown to Pirate’s Wharf opening to the public has gone from years to a matter of months. The project is set to advance to construction this year, taking the long-awaited attraction from plan to reality. Steve Miller, director of Wicomico County Recreation, Parks and Tourism, shared information on what to expect, some recent changes, and future hopes for Pirate’s Wharf.

According to Miller, the park could be open to the public as early as the end of this year. In this early stage of Pirate’s Wharf’s development, the public can expect an event area, public water access, and access to the scenic landscape. Specifically, a pavilion, restrooms, and parking will create space for small gatherings and a public dwelling. 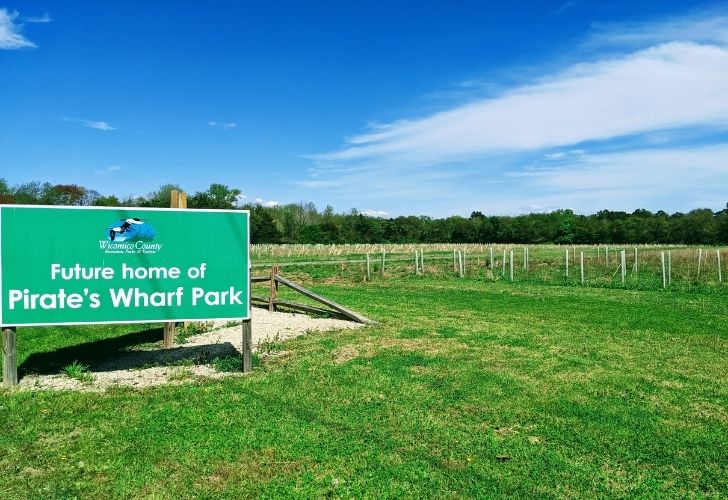 A boat ramp will allow for small crafts, up to 28 feet in length, to enter the local waters from the park. To explore the land, a historic trail will provide a look at Pirate’s Wharf’s past, a second trail will focus on nature and forestry, and an observation deck is intended to allow the public to enjoy the view along the picturesque property.

Further development will bring even more to Pirate’s Wharf. A pier for fishing, a small playground, additional observation decks and trails are all expected to be part of the phased roll out. Also part of the master plan is a soft launch area to allow for kayaking and canoeing in the waters.

Miller remarks that the county wants to, “keep the park as natural as possible and provide water access and public access.”

According to the project’s master report, the main goals are to provide water access, public recreational amenities, and to preserve the natural land. “One aspect that has the potential to be special is access to the water…it’s a really pretty spot,” says Miller.

The development of Pirate’s Wharf in Quantico began as a work group in 2017, established by late Wicomico County Executive, Bob Culver. Twenty years after the property was purchased by the county, stakeholders and community members came together to devise a master plan that would be released in 2019.

Funding for the project comes from Wicomico County and grants. Funding also includes state and federal grant sources and a Lower Eastern Shore Heritage mini-grant. As the development of the park evolves, the search for funding continues. Funds have grown to $2 million from the original $1.89 million.

Miller indicated that, “any time we secure additional funding, it allows us to push further into the plan.”

The trajectory of this plan, like so many other aspects of life around the county and the globe, went off track when the pandemic hit just months after the master plan was posted for public feedback. With state offices closed for a period of time in 2020, obtaining the permits necessary to continue construction stalled. These permits are now being sought, which Miller describes as a lengthy process, but once done will greatly advance the project.

Miller shared his thoughts on the advancement: “I think things are moving. It’s a process, but we’re making progress. We look forward to the day when this is accessible to the public. They have been eager for this.”

He foresees bids for contractors to begin in the fall, if all goes well.

The stall on permits hasn’t completely shut down the progress of the park’s development, however. Wicomico County has worked to plant thousands of trees — shaping farmland into forest — and completed archeological requirements. This has led to a slight re-routing of trails delineated in the master plan, which is available on the Wicomico County website, but Miller indicates changes have been minor overall.

One new change, favorably voted on by Wicomico County Council, is the dedication of the park’s boat ramp to honor Bob Culver who passed away in the summer of 2020. According to Miller, Culver was a major supporter of the Pirate’s Wharf project.