The coronavirus pandemic has been like nothing we’ve seen in living memory. Even without looking at the medical aspect, the economic and lifestyle changes have been monumental, from quarantining to facemask guidelines. During this time, small businesses have struggled to survive, and many did not.

Some, though, were able to pivot with their respective industries’ changing regulations. Kevin Reading, who has worked in the restaurant industry nearly all his life, was able to make such changes and keep not one, but three independent restaurants alive in a year when people were not able to dine out. 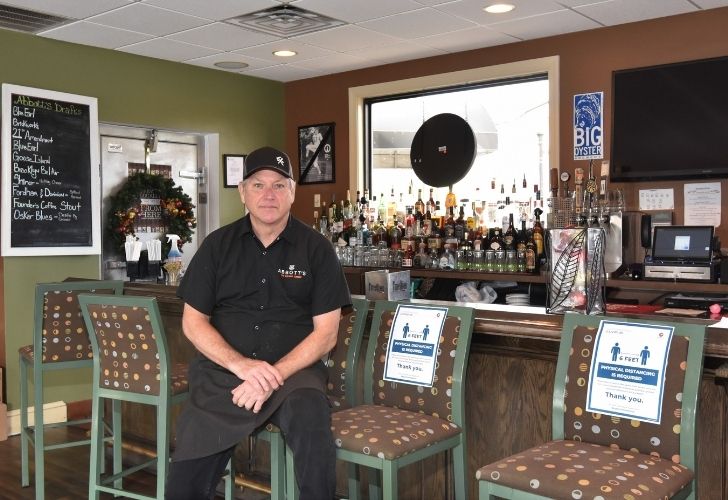 Adjusting to the coronavirus restrictions has certainly been a challenge, but restaurant owner Kevin Reading (pictured above) looks forward to seeing his loyal customers back when they feel safe. Photo by Bernard W. Carr

You can’t doubt Kevin’s experience in the industry; he began working in a restaurant in his hometown of Gainesville, FL, at age 12 doing dishes and other odds and ends. After pursuing culinary school in his 30s, his true calling within the business found him, as he fell in love with cooking, and the back of the house became his home. He opened a restaurant in Wilmington and several others in the Rehoboth area before he and his business partner, Laura Burton, were approached about opening Abbott’s Grill in Milford. Though they decided last year not to renew the lease on that particular venture, it was a successful business for 10 years.

Seven years ago, however, they were asked by the Laurel Redevelopment Corporation (LRC) to take a look at a beautiful location on the water in downtown, where the Laurel location of Abbott’s Grill is still standing strong. Since then, they collaborated with Mispillion River Brewing to open Brick Works Brewing and Eats in Smyrna five years ago before opening a second location in Long Neck.

So how does an industry built around quick table turnover and a full house stay afloat during COVID? Some of it was obvious: a strong take-out menu and delivery presence. Reading added those services to his lineup and saw the payoff. He revamped their Point of Sale system to allow for an easier customer experience ordering and paying on their websites. This system coupled with curbside pickup allowed for the least amount of contact possible, which made many people feel more comfortable.

All three of his restaurants had outdoor seating, which made a big difference. Some would not sit inside but were willing to sit outside, so the summer months saw good business. Even during the winter, people are able to take advantage of some of the 60-degree days we’ve seen in the last month. Reading intends to make each patio available to him more year-round by adding some semi-enclosures that would provide shelter while still keeping ventilation.

By investing in this and in new vehicles to continue delivery, he hopes to build a model that will keep steady during hard times while thriving in regular circumstances.

Reading also ran with an idea that was already in place at each location. “I have been a very strong proponent of the farm-to-table movement,” he said. He reached out to farmers who he knew already, and three in particular established a partnership with him: Fifer Orchards in Camden Wyoming, Totem Farms in Milton, and Evans Farms in Bridgeville.

This concept was most utilized at Abbott’s Grill. Between this and the fact that Kevin and Laura were the sole owners of the Laurel location, Abbott’s was doing the best of the three restaurants in the beginning stages of COVID. In his situation, it was easier to make snap decisions or post a featured menu to Facebook, and they would immediately see the orders coming through.

But any restaurant is still beholden to the community it resides in, and during a world-wide crisis, small communities banded together. “We had a tremendous support of people that felt for us,” Kevin said. People were buying gift cards and asking what they could do. They would see no one was there and tip the bartender during a pickup order, and overall were “extraordinarily generous, especially in the first several months.”

And Kevin paid that forward. He and Laura haven’t had to lay anyone off since that initial hardship, and they brought many back. He worked more hours and engaged his employees with a supportive outlook, saying that in the hospitality business, they should always try to make things work for people.

“Right now, we need friends,” he said. “If somebody went out of their way to come into downtown Laurel to have a quick bite to eat, I’m going to feed them. So I think that mindset has been spread across all of our restaurants. Everybody is going through a tough time and everybody needs a break. Let’s make it easy for people. Let’s spread more kindness.”