The Woodbridge Blue Raiders’ 2020 football season ended last Saturday with a 31-22 loss to the Archmere Auks in the semi-final round of the DIAA state tournament.

The Auks brought a whole package to the field with rushing, passing, and field goals while Woodbridge suffered through numerous penalty flags. 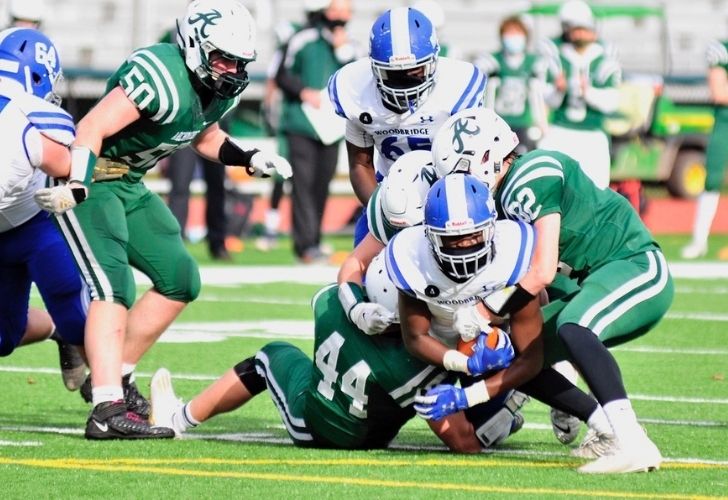 Kenny Newton fights for yardage with three Auks on his back. Newton scored on a 67-yard touchdown run for the Woodbridge Raiders in the game against Archmere. Photo by Lynn Schofer

Woodbridge head coach Jed Bell said after the loss, “At the end of the day they took advantage of the mistakes we made and unforced errors. It is hard to win football games and even harder to win playoff football games, especially when you make mistakes.”

The Blue Raiders grabbed the momentum early on junior Jaden Bacon’s 82-yard rushing touchdown after Archmere turned the ball over on downs at the Blue Raiders’ 18 yard-line. Down 6-0, the Auks fumbled the ball and Woodbridge’s Corey Sanders recovered it.

In the second quarter, Sanders had a tackle to force another turn over on downs, but with six minutes to play Tyrez Cannon’s fumble was returned 20 yards by Archmere’s Kevin DiGregorio for the touchdown and extra point gave the home team a 7-6 lead.

On the next possession, the work of Bacon and Kenny Newton combined for 50 yards before quarterback Jordan Evans ran five yards and reached for the end zone for the touchdown and Newton went back to work for the two-point conversion and a 14-7 lead with less than a minute to play in the first half.

The Auks took the kickoff and the Raiders’ Ci-Atrick Stones made the tackle, but on the first play a roughing the passer against Woodbridge placed Archmere at midfield. A 23-yard pass completion and another penalty by Woodbridge for a defensive hold moved the chains to the 22 yard-line. Both Evans and Bacon made tackles in the red zone, and after an incomplete pass with 2.4 seconds on the clock, the Auks kicked a 20-yard field goal to cut Woodbridge’s lead to 14-10.

Coach Bell said of the Archmere Auks, “They played extremely complimentary football and we faced some adversity against a very good football team.”

Archmere took the lead, 17-14, in the third quarter when the punt was tipped and the Auks began a drive inside Woodbridge territory. On third down, quarterback Chris Albero connected for a 38-yard passing touchdown but the celebration was short-lived when Evans blocked for Newton who posted a 67-yard touchdown run and two points for the 22-17 lead going into the final quarter. Woodbridge made some big plays, but handed Archmere easy yardage on off side penalties and mistakes that cost them in the fourth quarter. “We got away from doing what we do in moments of adversity and that was obvious by some uncharacteristic penalties and mistakes. Ultimately that falls back on me as the head coach,” said Bell.

On the opening drive Archmere was aided by two Woodbridge penalties and ended with a 33-yard field goal by Albero for a 22-20 Woodbridge lead with 9:55 to play. Another tipped punt on the next Blue Raider possession and run back placed the Auks at the three yard-line and the quick touchdown gave the Auks a 28-22 lead.

Woodbridge made a drive with a 38-yard pass reception by Bacon, but turned possession over on downs with five minutes to play in the game. Archmere moved the ball 50 yards before Albero kicked a 25-yard field goal for the 31-22 win which sent Archmere to the state championship game.

“I love our kids so much for their commitment to our program and the daily grind that they displayed. This was such a hard year with so many unknowns and so much uncertainty. They stayed committed to the team, their teammates, and the task at hand- they never wavered,” said Bell. “We are grateful for our community, school, and fans for rallying behind us and supporting us even though they could not be present as much as we would have liked them to be. Our kids have dealt with so much adversity over the last two years- there’s a bitter taste in our mouth and we still seek out every game and every year to do a job for Troy.”