The Laurel and Woodbridge varsity football teams entered last Friday’s game in Laurel tied for the Henlopen South lead with 3-0 marks. The Blue Raiders scored two touchdowns and two two-point conversions in the first half while the defense held the Bulldogs to no first downs in the game for the 16-0 victory.

“These guys worked really hard. We had a great week preparing for these guys,” said Woodbridge head coach Jed Bell. 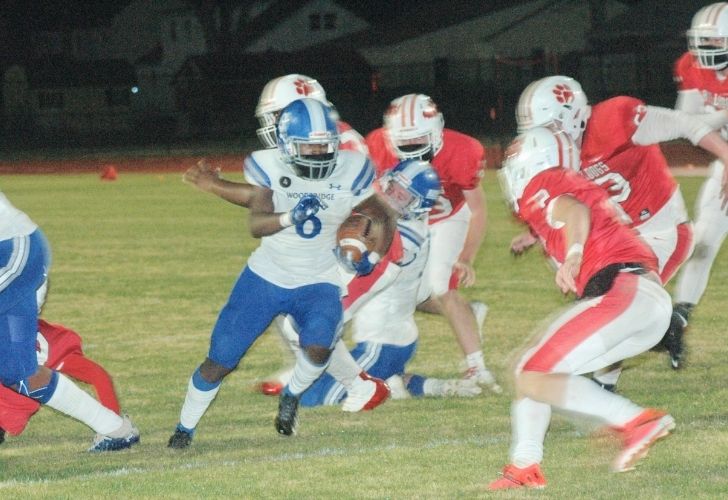 Woodbridge put together a scoring drive on its first possession, starting at the 18 yard-line. Raiders’ quarterback Jordan Evans completed a 24-yard pass on third and six from the 22 and Kenny Newton ran for three yards on fourth and three from the 47 to keep the drive going. Evans added an 11-yard run on fourth and three from the Laurel 37 before completing an 18-yard pass to Michael Plummer. Evans lost the ball on a run on first and goal from the one, but teammate Noah Matthews fell on the ball in the end zone for a touchdown. Kenny Newton ran in the two-point conversion for an 8-0 lead with 3:34 left in the first quarter.

Laurel started with the ball on the 37. On third and two from the 45, Woodbridge’s Rasheed Stones stopped Laurel quarterback Kaden Shockley for no gain, forcing a punt.

The Raiders started their next possession on their own 45. Plummer picked up six yards on third and three from the Laurel 48, Jaden Bacon had a nine-yard run, and Tyrez Cannon rumbled for 20 yards. Facing third and 26 from the 28, Evans looked to pass then scrambled for a 28-yard touchdown run. Newton added another two-point run to make the score 16-0 with 8:56 remaining in the first half.

Following the kick return, Laurel’s offense took over at midfield. The Bulldogs’ Kylse Wilson was stopped for no gain by the Raiders’ Or’mon Sanders and Corey Sanders on third and three from the Woodbridge 43 and Kshawn Cox broke up a pass on fourth and three.

Laurel’s Damontra Smith recorded a sack on third and 10 from the 43, forcing Woodbridge to punt. The Blue Raiders got the ball back following a Bulldog punt. Bacon ran for 11 yards and Newton added a 10-yard run to move the ball into Laurel territory. Bacon was held to four yards by Smith on third and nine from the Laurel 37. Evans’ pass on fourth and five fell incomplete with 19.2 seconds left in the half as Woodbridge took a 16-0 lead into half-time.

Woodbridge’s defense once again held the Laurel offense at the start of the third quarter, forcing a punt. Woodbridge started with the ball on its own 13 and was pushed back six yards on a sack by Laurel’s Kyler Weaver before Bacon broke off a 19-yard run. Evans ran nine yards on third and six, Cox had an 18-yard run, and Cannon gained a yard on third and one from the 49.

The Raiders took over on the Laurel 36 following a punt, but Evans was held to a one-yard gain by Laurel’s Jaden Snyder on fourth and four from the 30. Woodbridge held on to win the road contest, 16-0.

Bacon ran for 79 yards, Evans ran for 43 yards and a touchdown and passed for 47 yards, and Cannon added 40 yards rushing. Bell and the Raiders have six running backs, plus Evans, who can run the ball for them. “The challenge is you want to make sure these guys get the touches,” Bell said.