Woodbridge football team looks to improve with each practice, game

Woodbridge varsity football head coach Marvin Dooley has been pleased with the effort of his players so far this pre-season. While he saw some mistakes in a recent scrimmage, he believes his team can fix the mistakes. 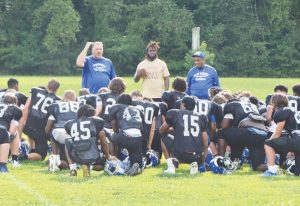 Woodbridge head coach Marvin Dooley talks to his team during a break at practice earlier this week. Photo by Mike McClure

“Any mistakes made with effort can be fixed. You can’t teach effort,” said Dooley, who is looking for his team to get better every day. “This has really been a good camp. The kids have been great.”

Dooley said he is looking for six or seven players to step up to fill the void of the players lost to graduation.

Risper got most of his playing time during the playoffs while Johnson saw time last year. Dooley liked what he saw from Banks, who had two interceptions in the scrimmage.

“I think our district is the best. Any time you play the schedule we play, if you make the playoffs you have a shot,” Dooley said. “You start here and hopefully come November we’re way above that.”