The Woodbridge varsity boys’ basketball team held a six point lead over Delmar at half-time and withstood a second half charge by the Wildcats to win the home contest, 60-51, last Thursday in Greenwood.

“I’m glad we made it out of here with a win,” said Woodbridge head coach Julius Cannon. “That’s a great team, they’re well coached. They get better and better every year.” 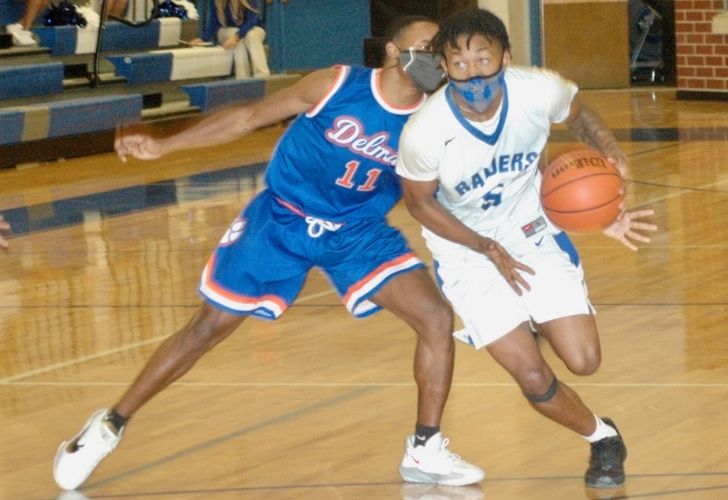 The Raiders’ Jaden Bacon takes the ball to the basket in his team’s 60-51 home win over Delmar. Photo by Mike McClure

“I felt great coming into the game. Nobody can mess with us in the South, I believe,” Raiders junior Deronn Kane added. “We did really good on defense. We just have to stay on our man, slide our feet.”

Delmar took a 7-6 lead early in the first quarter on baskets by T.J. Gibson and Jeremiah Lumpkin-Beale. Woodbridge answered with a 15-0 run as Emanuel McCrea-Mosley scored seven points and Kane added four. The Wildcats’ Kyler Shepherd closed the quarter with a basket to make the score 21-9.

Delmar closed the gap to eight points on baskets by Lumpkin-Beale, Gibson, and Davin Chandler before the Raiders’ Rasheed Stones hit a three-pointer. Down by 12, the Wildcats scored six unanswered points to cut Woodbridge’s lead in half. Gibson, Cameron Bozman, and Jaylin Warner tallied two points apiece during the run.

Kane scored four more points for a 10 point Raiders’ lead. Warner made two free throws at the end of the half to pull Delmar within six at 35-29.

Kane led Woodbridge with 12 first half points and McCrea-Mosley added seven. Gibson tallied eight points and Lumpkin-Beale and Warner netted six points each for the Wildcats.

The Raiders opened the second half with a 9-2 advantage to extend their lead to 13 on four points from Kane, a three-pointer by Kay’Shaun Dickerson, and a field goal by McCrea-Mosley off a steal.

Delmar’s Brian Spence converted a three-point play and Jarrin Mitchell made a pair of free throws at the end of the quarter to make the score 45-40.

Woodbridge’s Jaden Bacon dished out assists to Dickerson and Newton for a seven point lead with 6:16 remaining in the game.

The Wildcats knotted the score on a putback by Warner and a field goal by Chandler. Woodbridge closed out the game with nine straight points for the 60-51 win. Kane scored five points and Bruce Mosley added four during the run.

“We knew they were going to make a run. This game is full of runs. We just had to weather the storm,” said Cannon. “I’m pleased to get a win tonight but we’re not satisfied, we want to get better.”

“I feel like we did a great job in the second half and on defense,” Kane said.