The Delmar varsity boys’ basketball team led by as many as 15 in the first half of last Thursday’s home game against Woodbridge, but the Raiders battled back. Down by only three at the half, Woodbridge came back to win the game, 58-51, to give head coach Julius Cannon his 100th career win.

“We just kept our composure. A lot of things weren’t going our way. We kept our heads,” said a drenched Cannon following the post-game celebration. “We hadn’t won in here for the last two years. This is a hard gym to win in.” 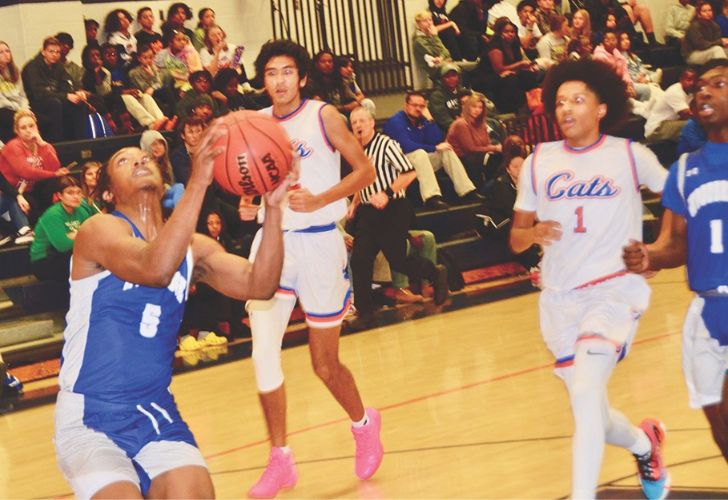 Woodbridge’s Bruce Mosley prepares to put up a shot in his team’s road win in Delmar last week. Mosley scored a game-high 27 points and pulled down 14 rebounds. Photo by Mike McClure

The Wildcats’ Takai Hugee scored four points and dished out an assist to give Delmar an early 8-2 lead. Patcharadanal Suha made a three-point play and Hugee hit a three-pointer as the Wildcats led the Raiders, 20-8, through the first quarter of play. Hugee led all scorers with 10 points in the opening quarter.

Hugee continued his hot shooting with a three-pointer to open the second quarter. Teammate Anthony Jackson added a three give Delmar a 26-11 advantage.

Hugee led Delmar with 18 first half points, Mosley scored 13 including 11 in the second quarter, and the Raiders’ Malachi Hayes added six points.

Mosley scored four points and Hayes made a layup to knot the score at 33-33 at the start of the second half. Hugee answered with four points and Suha followed his own shot for a 39-36 Delmar lead.

Woodbridge came back with seven straight points to take the lead on four points by Ci’Atrick Stones. Hugee made a three-pointer at the end of the third quarter to cut the Raiders’ lead to 43-42.

Woodbridge scored the first six points of the fourth quarter for a seven point advantage. Delmar moved within one when Emanuel Ortiz Villaman made a basket and Hugee hit a three-pointer.

Mosley scored five points and Stones had three down the stretch as Woodbridge held on to win, 58-51. Mosley led the way with 27 points and 14 rebounds, Stones netted nine points, and Hayes added eight points and three steals. Hugee paced the Wildcats with 26 points and Suha had seven points and nine rebounds.

“We have to start on defense,” Mosley said. “Everybody on the team helped.”