The Delmar Police Department continued its efforts to build its police force up with an oath of office ceremony for three officers last Wednesday at the police station. The officers received encouragement from a large group of citizens, elected officials, town and police staff, and representatives from the Delmar School District. 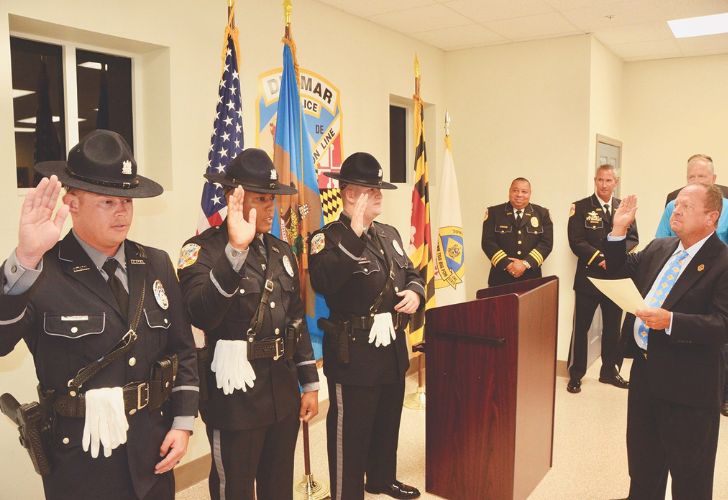 “There’s no secret that the Delmar Police Department has been in a rebuilding phase,” Delmar Police Chief Ivan Barkley told the crowd. “In a time when this profession might not be the most popular, a few young men have answered the call. Today they make a commitment to the citizens of this town.”

“What a special day this is. These three men have given their faith and effort to serve this town,” said Delmar (Del.) Mayor Michael Houlihan. “We’re proud of you and today you will truly become part of our town family.”

“Thank you for making the decision to serve this community,” Delmar (Md.) Mayor Ben Jorden added.

Houlihan and Jorden each swore in Zachary Coco, Nicholas Snead, and Jacob Engelskirch as patrolman first class. Later in the ceremony Town Manager Jeff Fleetwood asked each officer why they chose to become police officers.

“A few years ago I lost my aunt and I wanted to make her proud,” Snead said.

“I never had any doubts what I wanted to do so here I am to serve all of you,” added Engelskirch.

Barkley said he is looking forward to having another ceremony following the graduation of two more recruits from the police academy. Like in most professions, it hasn’t been easy finding new officers to fill voids.

“This is the building block for us, getting back where we need to be to serve the community,” Barkley said after the ceremony. Our profession is taking a beating right now. When you look out and see the people you are serving are out there to support you it makes it easier for them to serve the community. This kind of support makes it all worth it.”

Following the ceremony, a reception, was held in Camelot Hall at St. Stephens United Methodist Church.