The Salisbury University Foundation, Inc., recently welcomed five new members to its board of directors. 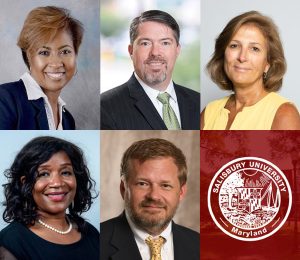 They include Dawn Adkins-Harcum of Hebron; Ruby Brown of Eden; David Harkins of Salisbury; Eric McLauchlin of Fallston; and Nicole Turner of Berlin.

Adkins-Harcum is a group controller at Microwave Products Group in Salisbury. She earned her B.S. in liberal studies from SU in 1992.

Brown is the supervisor of the Gifted and Talented programs in Wicomico County Public Schools and a member of the advisory council for SU’s May Literacy Center. She earned her B.S. in elementary education from SU in 1993.

Harkins is the owner, CEO and president of The Harkins Companies, a conglomerate of companies specializing in real estate, development, general contracting, concrete construction and ready-mix manufacturing.

He also serves on the Life Crisis Center board of directors and Salvation Army local advisory board.

McLauchlin is an attorney at Pessin Katz Law, P.A., of Bel Air. He also is an emeritus member of the University System of Maryland Foundation board of directors. He earned his B.A. in French from SU in 1992.

Turner has worked for the federal government for over 30 years in project management, policy and budgetary management. She earned her M.B.A. from SU in 1997.

“We are excited to have such qualified members on our board of directors,” said Jason E. Curtin ‘98, SU vice president of advancement and external affairs and executive director of the foundation.