Shawn Brittingham appointed as president of State Board of Education

When Delmar resident Shawn Brittingham attended his first school board meeting 25 years ago, he had no idea where that path would lead. After serving on the Delmar School Board for 23 years and two years on the State Board of Education, he was recently appointed by Governor John Carney to serve as the president of the state board.

“If you told me (25 years ago) that I would be in this position I would have told you you were crazy,” said Brittingham. “It turned into a passion.” 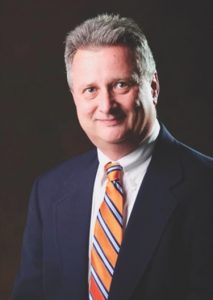 Brittingham first ran for the Delmar School Board as a challenge. He stayed on for 23 years, including 18 years as vice president or president, and says he learned a lot from his fellow school board members and the school’s administrators.

“This school’s the heartbeat of the community,” he said of Delmar, adding that he serves on the board to pay it forward because “somebody did it for me.”

The process to get on the state board took three years and was not easy. He eventually met the criteria to fill an open seat, with the help of Rep. Tim Dukes. When he did, he became the first western Sussex resident on the State Board of Education in three decades.

“It’s a different ball game dealing with the state level. I learned a lot. I thought I knew everything with the school board. Everybody on the board brings a different perspective. I bring the western Sussex perspective,” said Brittingham, a self-described “small town boy”. “It’s a privilege to serve western Sussex and Sussex but I represent all of Delaware. I’m a voice that can be heard for Sussex County. I represent everybody but I take great pride in Sussex County.”

“I watched Shawn lead for several years on the Delmar School Board. With his experience, he is a natural fit for the State School Board. I am extremely proud that he has been appointed by the Governor to serve as the Delaware State School Board President. I have no doubt that he will represent western Sussex County well through his tenure on the state board,” Dukes said.

Brittingham became vice president of the state board last July. After the president stepped down in May, he began inquiring about becoming president. Following conversations at the state level, he received a call from Governor Carney on July 1 asking him to serve as president. But that was not the first phone call he received.

“Mark is a dynamic leader,” said Brittingham. “I really am glad that I am going to be able to work with him.”