The Seaford Blue Jay boys’ basketball team defeated Woodbridge on their own court by a score of 76-65 last week. Seaford was led by Brent Ricketts with 25 points while Woodbridge’s high scorer was Bruce Mosley with 19 points.

The hard fought physical battle began at tip-off. Ricketts sunk two straight three-point baskets from the right side and then took the pass on a steal which led to a slam dunk and gave Seaford an early 10-2 lead. 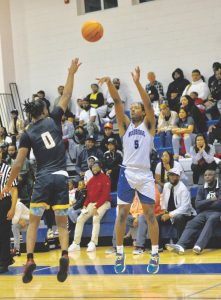 Bruce Mosley led the Blue Raiders with 19 points in the Henlopen South home game against Seaford. Photo by Lynn Schofer

The Blue Raiders stayed their course and took advantage of reaching mistakes by the Seaford defense and were back in the game, down by one point with three minutes to play in the first quarter. The Blue Jays foiled scoring opportunities with an attempted alley-oop and turnover on a fast break play. The Blue Raiders’ Traci Johnson hit from the corner and in the final play of the quarter tied the score on an inbound play.

In the second quarter, Seaford’s fouls mounted to seven against Woodbridge’s one and the Blue Raiders went to the free throw line. Ricketts went to the bench with his second foul and Makel Hubbard found Akendre Matthews for the score and a four point lead. Seaford took a 39-34 lead into half-time.

In the third quarter, Seaford held Woodbridge to 10 points while the Blue Jays turned up the offense, scoring 20 points. The Blue Jays fell back into a zone defense and covered the lanes and corners, denying Woodbridge both inside and outside shooting. The Blue Jays picked the ball from the hands of the Woodbridge point guard and Kashmier Wise finished the fast break for the Blue Jays.