At the start of the 2022 track season Seaford’s first year head coach Jamaal Austin said the year is about the rebirth of Seaford track and some wins would be nice but was not the focus. Little did he know that hiding inside the walls of Seaford High were runners who would win a Division II relay race as well as the boys’ 200 meter dash. 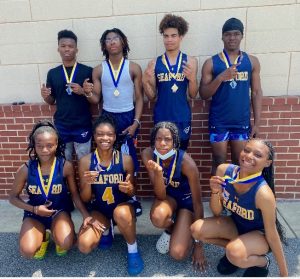 The last two seasons were mostly a bust for schools. COVID shut it down and athletes did not have the opportunities to compete. This season schools were reopened and sports were once again in full flight.  Seaford struggled the last 10  years with participation and commitment to the team. Coach Austin, who is also an assistant coach in football and basketball, decided it was an opportunity to be a head coach. He received encouragement and support during the meets from retired coach Duane Henry and also added a staff that the athletes knew. The result was a full roster of competitive athletes who went on to be Division II boys’ 4×200 relay (1:31.52) champs: runners Tyree Seymore, Michael Trammel, Tre’Von Paulson, and Jazonte Levan.  Levan also is the 200 meter dash (22.15) state champion. Bazeline Medard, Myesha Seymore, Carme Lange Jean-Baptiste, and Jeannica Odaris are the Division II girls’ 4×200 (1:53.30) bronze medal winning relay team.

“I appreciate all the support from Coach Henry and the Athletic Director (Mark Quillin). We definitely went well above expectations. Next year the bar is set and we have over 75 percent of the team coming back,” said Austin. “We had the coaches here and this year it just came together. We knew Jazonte would have a special season.”

Levan said of his winning the state title, “I never worked on my speed and honestly I did track to get faster for the football season. I had no idea how much I would enjoy it. I am now committed to it and want to improve my times for next year.”

Coach Austin said Jazonte is an all-around natural athlete. “He was on the varsity squad in basketball and was always in the mix. He is a heck of a football player and it all ties in together,” said Austin. “Track opened up opportunities for kids who wanted to be part of a sport and the kids just wanted a chance. Track gave a lot of kids an opportunity to shine. Track is an avenue to college too.”

Levan is participating in the New Balance Nationals in June at Penn University in Philadelphia. “Before this year I never worked on speed training, it was all natural and I just know if I have training and technique, I can do more,” he said.

Medard, a junior who will also participated in the New Balance Nationals, said, “We were focused because we had wanted to medal for a long time for Seaford. We worked on improving hand-offs and techniques which we really improved from the beginning of the season.”

Both Jazonte and Bazeline are excited to bring medals home to Seaford. “This is very cool to do this for Seaford. Honestly, when I won states I thought about the banner in the school and our names on it. It will stay up there for all to see in the future. It has been a long time since track was successful,” Levan said.

Both would like the school’s students to give track a try. They said they also want them to commit to making good choices in the classroom and on the field.

Both athletes will return next year and Coach Austin, along with his staff, believe Seaford will once again be a track team that other schools will want to compete against.