Three quick dunks and two minutes would eventually determine the outcome of the Henlopen Conference Championship game played in Dover last Saturday between the Seaford Blue Jays and Smyrna Eagles. After Smyrna outscored Seaford, 17-7, in the third quarter, the Blue Jays fell short on a fourth quarter comeback and lost the game, 59-53.

“We had a bad spurt in the third quarter, we let them get some easy buckets and we could not quite catch up,” Seaford head coach Vince Evans said of the game. “We will watch film and make corrections.” 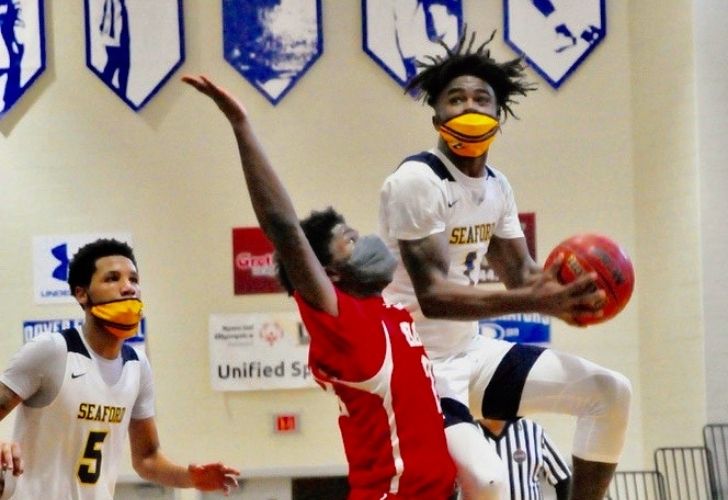 Brent Ricketts led the Blue Jays with 28 points in the Henlopen Conference championship game against Smyrna. Photo by Lynn Schofer

The Blue Jays’ inexperience in playoff situations did not get in the way going up against a team with strong seniors and playoff experience. High energy early on by both teams and some fundamental errors kept the game tight in the first quarter. Seaford’s four turnovers were costly, with Smyrna scoring on three of the four turnovers.

Seaford’s Brent Ricketts let it be known that he was there to play, scoring 10 points in the first quarter. Evans said of his sophomore player, “Brent was awesome today and he kept playing. They are a great team and Brent kept us in the game.”

Ricketts scored 28 points for the Blue Jays including several clutch baskets with the Eagles’ defenders in his face.

In the second quarter, Seaford’s costly turnovers mounted on the first three possessions. Somehow the Blue Jays played through, swapping baskets to make the score 26-26 at half-time.

In the second half, Seaford’s momentum switch took effect after an offensive foul call and another turnover. After Ricketts sunk two free throws for a 30-28 game and Seaford committed a turnover, Smyrna’s Olumuyiwa Salako had three dunks.

“It was that two to two and a half minutes. We let them get a couple of dunks and just could not close the gap,” said Evans.

The Eagles scored nine unanswered points until Ricketts pulled in the rebound and drove the full court for two points for Seaford. Smyrna’s screens were effective and the Eagles ended the quarter with an easy two point drive for a 10 point lead going into the final quarter.

Seaford was not going quietly and began to score and close the gap while Smyrna slowed down the offense to work time off the clock. Seaford was whistled on all touches and led in foul calls, 7-3. Ricketts pulled up for a three-point basket to close the gap to three points with 1:30 on the clock.

In the quarter 13 of the 16 Smyrna points were from the foul line including in the final minute of play. Smyrna’s leading scorer was put on the foul line four times and scored seven points. The Blue Jays would not have the opportunity to come back and Smyrna won the Henlopen championship, 59-53.

Coach Evans said, “They will feel this loss and these kids work hard and played like we belong here. I think Seaford basketball has given notice to the state of Delaware.”