The Seaford High School boys’ basketball team is heading north to the Bob Carpenter Center to play in the semifinal round of the DIAA boys’ state basketball tournament. The road to “The Bob” has been full of ups and downs, but the team stayed within its goals and defeated Tatnall, Appoquinimink, and St. Andrews.

In the first game against Tatnall, senior center Tyrese Fortune collected his 1,000th career point in the third quarter. In the second quarter, Fortune went down hard to the court, holding his knee as the entire gymnasium took a deep breath. Fortune said of that moment in the game, “I felt nervous and I told myself I am not done, I am fighting and I got back up. Every time we practice I tell the guys we have to get this chip. It is my last year and we all want it.”   Fortune would return and scored the 1,000th point but the injury sidelined him against Appoquinimink and St. Andrews.

The Blue Jays defeated Tatnall, 76-62, with four of the starters scoring in double figures including Fortune’s 17 points.  Seaford’s Careen Bolden set the offensive pace and connected with both Brent Ricketts and Aviyon Matthews for the early Blue Jay lead in the first quarter. Seaford’s man-to-man defense and lightning quick transitions stifled the ball movement of Tatnall, which suffered multiple turnovers in the first half. 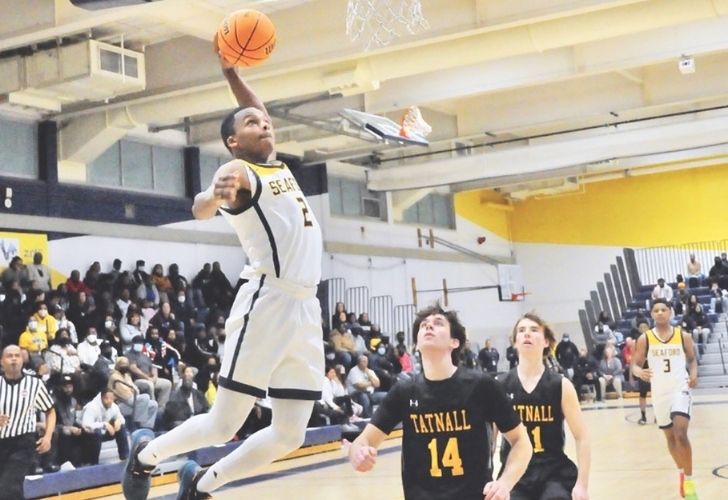 Careen Bolden finishes the play with a slam dunk for Seaford in the first round of the DIAA state boys’ basketball tournament. Photo by Lynn Schofer

Fortune opened the second quarter with a basket and Kashmier Wise sunk a three-pointer to spread the lead. Tatnall was not afforded second chances as Matthews, Fortune, and Wesnel Romain closed out the territory inside the paint. Fortune’s short jumper from the foul line area put him at 998 points and Seaford led by nine points at half-time.

In the third quarter, Fortune wasted no time, created space and pulled up for a jumper from the right elbow for his 1,000th point. The frustrations of Tatnall showed as a player was served a foul and then a technical foul for his response to the referee. Ricketts pulled up for a three-point basket and Seaford took a 14 point lead.

The Blue Jays continued the play into the fourth quarter with Ricketts striking for another three-point basket. Tatnall attempted full court pressure but Seaford’s quick, precise passing and ball movement was no match and the Blue Jays led by 19 points.  Seaford played some extra players in the final minutes of the game and took the first round win,76-62.

After the game, Fortune spoke about his 1,000 points and the team, “This is my dream and it came true. The loss to Doverhurt and as a senior I have to lead them. We have to step it up and play hard. It starts on the defensive end.”

Seaford went on the road to play Appoquinimink in the next round of the DIAA tournament and completely confused the Jaguars from the tip-off, controlling the momentum the entire game for a 76-57 win. Wise, who led the team with 27 points, said, “It just comes with trusting your teammates and knowing they can make every shot on the court and you can too. When everyone is talking and running and scoring it is fun.”

Seaford head coach Vince Evans said, “Our three guards stepped up and knocked down shots, the defense was strong and everything is coming together. You can pick any one of the players tonight because we are not a one man team.”

Seaford was without Fortune because of a knee injury suffered in the previous game. Ricketts, who scored 22 points, said, “I had to turn it up and did it for Ty (Fortune).”

Ricketts made his presence known and was unstoppable sinking five of seven baskets from three point territory. “It felt great tonight and we are all teamwork,” he added.

The game opened without a tip-off due to a pregame technical foul on Ricketts for dunking the ball during warm-ups. Matthews was the first Blue Jay to take command and he claimed the territory inside the paint at both ends of the court. Matthews, who scored 13 points and had11 rebounds, said of his play, “Ty’s injury made it important to step up and everybody thought we were going to lose. We stayed together and we play hard together. We challenge each other and we talk and play together.”

Seaford sunk a three-point basket at the end of the first quarter for a 21-7 lead. In the second quarter, Ricketts opened with a three-point basket and the ball movement of the Blue Jays put Appoquinimink on its heals. The Blue Jays’ precise movements and ability to collapse inside the paint to stop the drive was just too much for the Jaguars, who turned the ball over on four of six possessions.

Bolden’s and Wise’s lightening fast transitions and triple threat plays kept the Blue Jays in the lead by 18 points at half-time.  Bolden said after the win, “We knew we had to win this and setup and lead. Once we get going, we are unstoppable.”

In the second half, Seaford mounted a 20 point lead and then upped it to 30 when Ricketts hit another three-point basket. Wise sunk his second buzzer beater and Seaford led 54-37 going into the final quarter.

Romain stepped in for Fortune and fought for every rebound, making a statement that he may be off the bench but he can handle himself on the court. Coach Evans pulled his starting players and played out the remainder of the game for the 76-57 win.

Bolden, who finished with nine points, spoke for the team which is especially grateful for the hometown support. “To drive all the way up here to support us, man they are great and we appreciate our home town.  They gave us energy,” said Bolden.

Seaford returned home to Ben Sirman Gymnasium to play St. Andrews (#18), which defeated number two Caravel, to determine who would move on to play in the semifinal round at the University of Delaware’s Bob Carpenter Center. The Blue Jays (#10) took on St. Andrews and after 32 minutes the Blue Jays celebrated the 70-46 victory.

The last time Seaford travelled north to the Bob Carpenter Center was when Evans was a senior, in 1997, and the team brought home the state title.

“It is unbelievable and amazing. These guys put in a lot of hard work and it all began two years ago, the summer leagues, the shoot arounds, the clinics, open gyms, work out sessions and they definitely put in the work,” Evans said.

The Blue Jays were slightly sluggish out of the gate, but turnovers by St. Andrews made it unnoticeable when Seaford took a 14-7 first quarter lead. “I think the home game nerves and possibly overexcitement took the guys time to get into the flow of the game,” said Evans.

Seaford broke out in the second quarter and put their action into full gear for a 26-12 lead. However, the Cardinals went on a seven point unanswered run in the final minutes to narrow the gap 26-19 at half-time.

In the third quarter, Seaford reclaimed the court scoring on the first three possessions and Ricketts’ three-point basket lengthened the lead to 17 points. Romain, who stepped up for the injured Fortune, was a key element for Seaford at both ends of the court.

“I was ready for it,” Romain added. “I am a senior and this is my last year. We had to pick the game up in the second half. I needed to get the rebounds, be ready and be strong.”

Romain showed his strength, stepping in on a St. Andrew’s give and go and taking the charge for Seaford. “It feels good to win; they are my family and it feels great to be going to the Bob with these guys,” said Romain.

Romain then pulled in an offensive rebound to score for a two plus one play.  Coach Evans said of his senior forward, “We have been telling Wes all year to keep his head up his opportunity was going to come; he has been ready all year long. He was eager for more minutes and he took full advantage.”

Seaford turned up the emotion in closing plays of the quarter with Ricketts’ full lay-out dive for a loose ball on the ground to taking two hard hits on his approach to the basket for two three-point plays. Seaford led by 21 points going into the final quarter.

The Blue Jays were too strong for the Cardinals’ comeback hopes and Evans allowed his starters some rest and played out the game with his other players. Seaford celebrated the 70-46 win and will play Tower Hill on Thursday at 6:30 p.m. at the Bob Carpenter Center on Thursday.

Seaford and Tower Hill have a history; the Hillers knocked the Blue Jays out of contention in last year’s bracket. The Blue Jays defeated Tower Hill earlier this season and celebrated what they felt was revenge on the loss of last year.  This game will have a lot more at stake and the winner will go to the championship game to play the winner of the game between Salesianum and Howard.  “We will celebrate tonight and get back to work tomorrow,” Evans said on Saturday.