“It’s different than each one before. They’re all different because the teams are different,” Delmar head coach Jodi Hollamon said of this year’s team. “This season we rose to the occasion. We had the talent to do so.” 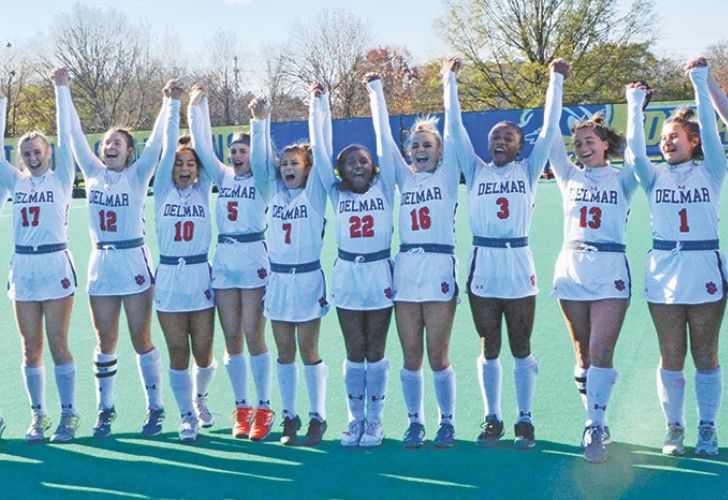 The Delmar varsity field hockey team’s players raise their hands in victory during the post-game ceremony in celebration of their state championship win. Photo by Mike McClure

“It’s amazing to close my final year at Delmar with lucky number seven,” senior Josie Hollamon said. “I couldn’t ask for a better team and school to play for.”

Hollamon scored the first goal of the game on a feed from Maci Bradford on a corner for a 1-0 Wildcat lead with 5:53 left in the first quarter. Bradford netted goal number two on a penalty stroke (4:02).

Archmere’s Bella Dell’Oso cut Delmar’s lead in half with a goal with 1:10 remaining in the opening quarter. Laela Brown tipped in a shot by Bradford with 31 seconds left to make the score 3-1.

Delmar’s Jordyn Hollamon netted a goal with 11:57 to go in the first half. Brown scored her second goal of the game (9:55) to help the Wildcats to a 5-1 lead going into half-time.

Bradford led the way with two goals and three assists, Brown netted a pair of goals, and Josie Hollamon added a goal and an assist. Jordyn Hollamon and Emma Price also scored one goal apiece as Delmar outshot Archmere, 50-1, and held a 23-0 advantage in penalty corners.

“It feels good because I’ve been wanting to get goals in,” Brown said of her two goals. “It’s an important game for the seniors and for us.”

“It’s kind of sad that it’s over but I’m glad I got this experience with my fellow seniors. We all grew up together,” added Price. “I was really hoping for that (goal). I wanted a goal for my last game.”

The Delmar varsity field hockey team advanced to the state championship game with an 8-0 win over Wilmington Friends last Wednesday in the state semifinals at the University of Delaware. Jordyn Hollamon led the way with three goals and an assist, Maci Bradford netted three goals, Josie Hollamon had a goal and two assists, Laela Brown scored a goal, and Brook Morris added an assist.