As part of its mission to promote unity in the Laurel community, the grassroots project known as “One Laurel” has been busy organizing events that are inclusive of the town’s diverse population. One of the most recent events was a youth basketball tournament that brought Laurel youth leaders, elected officials and citizens together to host an activity that was well-received by about 100 local young people.

Organized by Laurel Youth Sports volunteers David King and Mike Snead, the event became a culmination of efforts that had its challenges due to a lack of “court preparation.” King, who is a Behavioral Para-Professional in the Laurel School District, said the organizing of the event was not a hurdle given his involvement with youth sports activities. 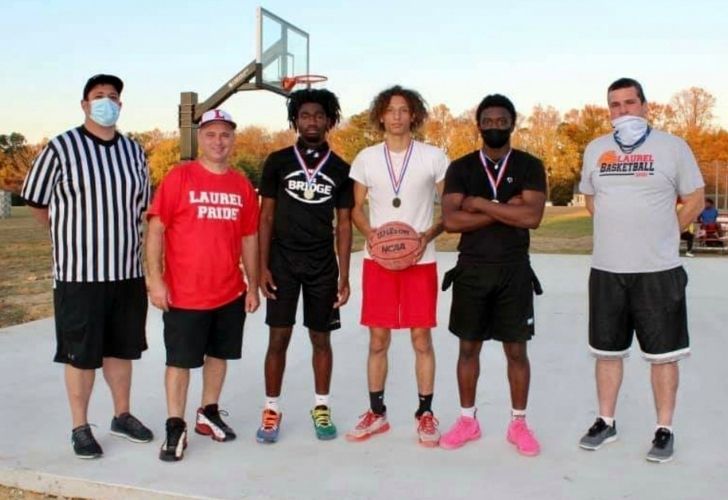 However, the challenges came when he began selecting the location for the tournament. He checked out the basketball courts near the former Laurel Middle School and was concerned with what he found. “I had reached out about getting the backboards put back and when I looked at the courts, I found the surface was really chewed up. I knew this would be problem because of fear that somebody may fall and get hurt. I inquired about the potential of getting that court repaired,” he said.

When finances to get the job done became an issue, King asked about the possibility of finding a different location. The Laurel School District offered the basketball courts located at the rear of the former North Laurel Elementary School. The courts also needed surface repair. However, the Laurel School District stepped in and hired local contractor, “Matthews Concrete” who took care of getting the basketball courts ready for the tournament.

King said all of the effort came together just in time to meet the deadline for holding the basketball tournaments. “We were very fortunate,” he said. “All of the efforts came together in about a month and a half. Everybody came out and worked really hard to get this done in time for the tournament. This was a culmination of efforts and support from the Laurel School Board, the Lions Club, the members of the One Laurel youth committee, and others who just really care about Laurel and the youth.”

The basketball tournament, held on Sunday, Nov. 8, featured three age groups of youth between the ages of 7 and 18 and utilized a “three-on-three” team concept. In the interest of promoting inclusion, efforts were taken to ensure that the tournament would not be an all-male activity. “Some of the teams with younger players were co-ed because we want to do all we can to provide opportunities for girls to be involved in team sports like basketball,” King said.

King is excited that the basketball tournament was well received and plans are underway to make it a reoccurring youth activity in Laurel. “We plan to have tournaments throughout the summer to help provide an outlet for our youth,” he said. “I have had phone calls from youth in Harrington, Milford, and other communities, who want to come play ball on our courts. I have been told that Laurel has some of the best outside basketball courts in Delaware.”

King said there is interest in bringing life to the area where the basketball courts are located. This includes incorporating basketball with the installation of Pickle Ball courts, outside chess and to operate in conjunction with a planned skateboard park. “We want to be able to provide outside activities for the young people in and around Laurel,” King said. “In the future we hope to also invite food and other vendors to participate during the basketball tournaments. We want to give our kids something to do and get them outside and active physically and mentally.”

Serving on the One Laurel Steering Committee, King feels his involvement is a natural fit. This is largely because of his commitment to young people in the community. In addition to Laurel Youth Sports, he also helps to coach Laurel High School basketball.

King and friend Mike Snead, who also works for the Laurel School District and is current President of Laurel Little League, have developed a youth mentoring initiative known as “Project SAFE (Students Achieving Fundamental Excellence).” The program provides life skill development activities for young men ages 14 and under. “We work with the youth covering a number of things from personal hygiene to filling out college applications,” King said. “We want to help these young men to the next level. Many of these young people are from single-parent households and Laurel is an area that is high in poverty. We want to be available to provide advice and some additional support to help them be successful in life.”

Prior to the COVID-19 pandemic, Project SAFE held weekly meetings with as many as 15 young men. King said once restrictions are lifted he and Snead plan to resume the program and have plans to expand its recruitment.

King said his overall mission and that of the One Laurel youth committee is to have a hand-in-glove connection. “Our goal is to help these kids to take pride and ownership in our town,” he said. “This has been lacking for several years.”

Laurel Councilwoman Robin Fisher Cornish, is a member of the One Laurel Steering Committee, and has been actively involved in events that have been organized through this initiative. She attended the basketball tournament and feels events like this are badly needed in the community.

“It has been a wonderful experience as One Laurel works toward the diversification of our town. To be able to provide our youth with events that they can enjoy and have various organizations and people striving to make these efforts a success, is overwhelming,” she said. “As a town we can accomplish great things and I look forward to seeing them come to fruition. Whether it be youth events, town and community pride events, initiatives to address diversity, education, or safety and policing, we are reaching each goal that has been, or will be, set as “One Laurel.”