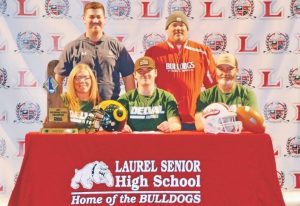 “The coolest part about teaching and coaching is not the every day part, it is the long game that you see,” said Laurel head coach Joey Jones, who coached Snyder in football and baseball. “When we yell at you and holler at you, this is why.”

“It feels amazing. It’s been a dream of mine since I was a little kid to go to the next level in football,” Snyder said.

“It felt like the right school to pick,” said Snyder. “I’m super excited. It feels like a fresh start for me, going somewhere new.”

Snyder, who will be studying something in the biology field at the university, said he is proud to be a Bulldog.

“I wouldn’t trade it for anything else. This is where I grew up. This is my home,” Snyder said.

Jaden was joined at last week’s press conference by his parents, Danny and Julie Snyder, and other family members. “I probably wouldn’t have been able to do it without them (family),” said Snyder.

He also credited Jones with pushing the program to a new level since he was in 10th grade. “He brought a new standard to the program,” Snyder said of Jones, who helped lead Laurel to a state championship this past season.