For some of the victims of last Thursday night’s fire at the Rigbie Garden Apartments, located in the 100 block of Central Avenue in Laurel, it was more than just their belongings that went up in smoke in the blaze, some lost their life savings. That’s when Sussex County residents, led by the Good Ole Boy Foundation and Laurel School District staff, stepped in.

“Our whole community stepped up and showed what love is all about,” said Rusty Dukes of the Good Ole Boy Foundation 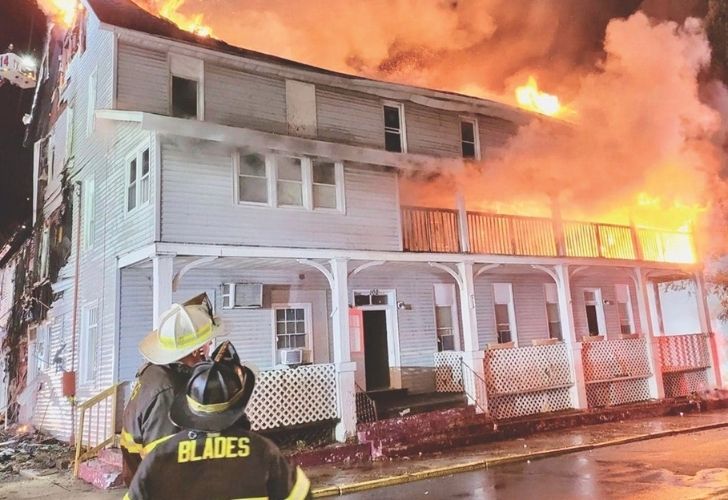 Shown is Thursday night’s fire at the Rigbie Garden Apartments in Laurel. Photo courtesy of the Laurel Fire Department

“Everybody rallies together when there’s a crisis and everybody helps everyone else,” Laurel School District Director of Student Services and Transportation Susan Whaley added.

The Laurel, Blades, and Seaford Fire Departments responded to the fire, which went to three alarms before being brought under control overnight. Nobody was injured in the fire but damage is estimated at $1 million. As of presstime, the cause of the fire was still under investigation.

Of the 55 people who were residing in the apartments, 20 are Laurel students with one post-high school student who is studying at Delaware Tech. According to Whaley, district employees went to the scene of the fire that night to help the students and their families.

“Those are our kids and our families that we work closely with,” said Whaley. Jay Hall provided a school bus, which was parked on Market Street to give the students somewhere warm to sit. Teachers brought jackets and blankets for the kids as firefighters worked to control the fire.

The families were taken to the Laurel Fire Hall, which served as the command center. With the Red Cross on the way, LSD staff members set up a registration table at the fire hall.

As the families arrived at the fire hall, so did pizza, snacks, clothing and shoes. The Good Ole Boy Foundation got the word out about the fire victims and community members began delivering donations. Within an hour or two the fire hall was filled with food, clothing and blankets.

“The outpouring of community support, I was amazed,” Whaley said. “People just started showing up in droves to provide essentials to help these people out.”

“It was incredible, the overwhelming outpouring of compassion and assistance from the community,” added Dukes.

Because many of the students are English learners, the school district’s EL team came to help translate for the victims. School busses transported them to various motels throughout the night. Whaley said the district’s staff also provided them with love and support during this trying time.

“The district as a whole did what our district does best. They called and showed up and did whatever was needed,” said Whaley.

For Dukes, the night brought back memories from when he was 14 years old and a fire destroyed his home.

“I know what it’s like watching everything you have going up in smoke and you can’t get anything,” he said.

But while it was a traumatic experience, Dukes said the fire victims left the fire hall Thursday night with clothing, suitcases (suggested by his son, Colby), and the love and support of the community.

“They had smiles on their faces. They now have a look of faith because our community stepped up,” Dukes said, adding that it was all of Sussex County that helped out, not just Laurel.

“It was truly a horrible day but the love and the care that was generated from this horrible event was inspiring,” added Laurel School District Superintendent Shawn Larrimore. “I’m very proud of Laurel: our town, our staff, our board of education and the resiliency of our students. Nobody circles the wagons like Laurel in times of crisis.”

The Good Ole Boys secured housing in Seaford for the victims Thursday night. On Friday, they took them more clothes and went to Walmart after asking the families for their specific needs.

An 11 year-old girl who lived in the apartments had a birthday the night of the fire. On Friday night, the Laurel teachers took her to Chick-fil-A for a birthday party.

The district’s casual Friday fundraiser (last Friday) raised over $4,000 for the children and their families. “The staff has been amazing,” Larrimore said.

Right now the Good Ole Boys are focusing on finding long term housing for the families. The foundation is raising money to keep the victims in motels until long term housing can be found. Money is also being raised to provide months of rent so they can get back on their feet.

Donations can be made to the Good Ole Boy Foundation website or at Dukes Lumber or at A and K tackle. 100 percent of the funds the foundation raises will go to the families.

“We’re proud of our partnership with them (Good Ole Boys),” said Whaley. “We want to find everybody a place to live in the coming weeks.”