The Delaware Military Academy caught some early breaks and took a 5-1 lead over Laurel through the first four innings of last Saturday’s state quarterfinal softball game in Wilmington, then in the fifth inning the Bulldogs’ bats came alive. Laurel rallied for five runs in the fifth and added an insurance run in the seventh inning before shutting the Seahawks down in the final half inning to secure the 7-5 win and advance to the state semifinals against Caravel (on Wednesday).

“Our coaches never gave up on us,” said Laurel center fielder Makenzie Whaley. “Once we got our timing down we knew it was over.” 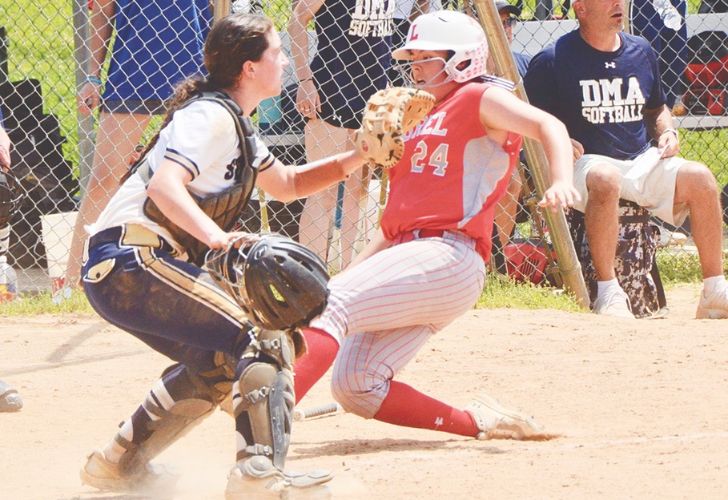 “Our team never gives up,” Bulldogs’ catcher Bailey Ullman added. “We just saw the ball better (in the fifth inning).”

Bailey Ullman hit a one-out double, Ashlyn Ullman was hit by a pitch, and Kylee Hill singled to load the bases in the top of the first inning. Whaley walked to force a run, but DMA avoided further damage. In the bottom of the inning, the Seahawks’ Lindsay Henn and Marisa Edevane each hit two-out singles before Laurel pitcher Kylee Hill got a popup to end the inning.

Delaware Military Academy went back to work in the second inning as Carly Opalach reached first on an infield single on a close call and scored when Alexandria Delcollo drew a walk with the bases loaded. Annika Downs hit an infield single to plate a run and Henn hit a two-run single for a 4-1 lead. DMA added one more run in the third when Hannah Navarro reached first on a bunt single and scored on a sac bunt by Emma Alfree.

Laurel’s defense kept the Seahawks off the board in the bottom of the fourth. Edevane and Sara Sobocinski each hit one-out singles, but Whaley made a diving catch and doubled up the runner at second base to end the threat.

The Bulldogs’ bats heated up in the top of the fifth inning, starting with Erika Johnson and L.B. Lynch, who each singled to lead off the inning. Shortstop Carlie Venables added a single to load the bases before Bailey Ullman hit a two-run single and Ashlyn Ullman doubled in a pair and scored on an error to give the Bulldogs a 6-5 advantage.

“Me and Erika, we’re freshmen, we’ve started rallies before,” said Lynch, who would later make a defensive play to seal the win.

Delaware Military Academy threatened in the bottom of the inning, but once again Laurel’s defense stepped up. Opalach led off the inning with a double and Lillian Wenzel walked before moving up to second and third on a ground out. Venables made a diving grab in the hole and second baseman Peyton Givans snared a sinking line drive to end the inning.

Whaley smacked a solo home run in the top of the seventh inning to give Hill and the Bulldogs an insurance run.

“It felt good. Everybody was really excited for me,” Whaley said.

Hill struck out a pair of batters looking to open the final inning. The sophomore slinger struggled a little with her control early in the game but was locked in down the stretch.

“It couldn’t have gone any better than that (getting two strikeouts),” said Lynch.

“Nobody deserves it more than Kylee, she works so hard,” Whaley added.

Lynch tracked down a fly ball over her head in right field, catching the ball with her bare hand after it hit her glove, to seal Laurel’s 7-5 win and send the team back to the state semifinals (where it advanced to a year ago).

“I knew I had to be ready for everything. I was on my toes. I saw the ball and I knew I had a long ways to go,” Lynch said of the final out.

Laurel was scheduled to visit top seeded Caravel in the state semifinals on Wednesday.