In recognition of the current teacher shortage facing school districts across the country, the Laurel School District presented a promise of employment to seven Laurel seniors during its meeting on Dec. 14. 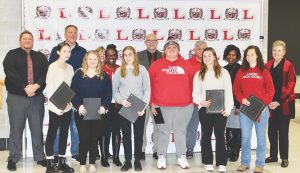 Shown with Laurel School Board members and administrators are Laurel seniors and future educators Brianna White, Amber Anderson, Gala Meseguer Molina, Cody Donoway, Sidney Hastings, and Lucy Rawlings who were each presented with a promise of employment contract for the 2027 school year during December school board meeting. The offers are redeemable following the students’ graduation from college. Not pictured is senior Wilvenska Mouche.

Superintendent Shawn Larrimore pointed out that he and several teachers and administrators at the meeting are Laurel graduates. He said the district wants to retain and grow their own teachers.

The future educators were presented with a promise of employment from the district for the 2027-28 school year, if certification and job requirements are met. The salaries will be in line with starting salaries at that time.

“This is historic, first time ever. I want to thank the Laurel School Board just for your innovation,” said Laurel High School K-12 Teacher Academy instructor Amy Handy. “These students really deserve it. Here’s the thing, you guys just have to go to college for four years. You know that you already have employment once you finish with those requirements.”

Also in attendance, wearing a Laurel jersey in recognition of the Laurel football team’s state championship win, was Delaware State Board of Education president Shawn Brittingham, a former Delmar School Board president and member.

Brittingham, who is visiting school board meetings across the state, said he was impressed with the district’s contract offers, adding that the teacher shortage is a problem. “It’s a crisis now, it’s going to get worse,” he said.

The board held a first reading for a student uniform policy change, which will allow the wearing of hoodies (as long as they match the school uniform colors). The change began after the winter break with the second reading being held retroactively at the next meeting. Students are not allowed to put their hoods up while in school.

During the November meeting, the board approved a request to host the Sussex County Honors Band on March 1 and 2 at Laurel High School.