Ruritan National, a service organization founded in 1928 by Tom Downing and Jack Gwaltney, lives by its slogan which is, “Fellowship, Goodwill, and Community Service.” The clubs, which got their start in Holland, Va., were created to provide a place where community leaders could meet and discuss how to make their communities better places to live. The unusual name, “Ruritan,” is derived from two Latin words: “ruri,” meaning open country, and “tan,” meaning small town. And this is exactly whom Ruritan serves: rural areas and small towns. 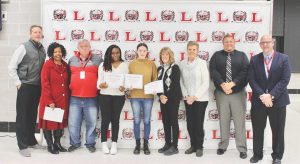 Each of the individual chapters survey the needs of their community, according to Derby Walker, secretary of the Laurel Club, and then work to meet those needs. Very little is done on a national basis, though Ruritan National puts an emphasis on helping with agriculture-related projects or support.

There are currently over 25,000 Ruritan Club members serving 900 communities across the U.S., according to their website, ruritan.org.

The Ruritan Club of Laurel, with 22 members, has stayed on task with the district’s goals.

On Jan. 27, the Rigbie Apartment Building, once a historic hotel in Laurel, caught fire and burned to the ground. The 54 people living there “lost everything,” said Walker. Though no one was injured, the families had nowhere to go. The Laurel Ruritan Club donated $4,000 to “help relocate several families.”

Walker, who retired from his career as a Sussex County Cooperative Extension Agent (an educational outreach of the University of Delaware), said he “got roped” into joining the group in the ‘80s because all of his friends were in the group. He’s been active in the group ever since.

Walker said the Laurel group prioritizes helping fire victims. However, wherever they see a need, they consider and discuss it. The club said they give the money to organizations, not to individuals, and they look at the track record and responsibility of each organization. “We want to do the most good, where the money goes the farthest,” he said.

This fall, the Future Farmers of America (FFA) Club at Laurel High School grew to 16 members, all of whom hoped to attend the National FFA Convention. They asked the club for help. The Ruritan Club looked into the matter. The FFA Club had already done fundraising and were working hard to pay their way to the convention. So the Ruritan Club gave them the money they needed to secure their spots at the convention.

The Laurel Club donated money to the town of Laurel one year to help purchase Christmas lights. They helped Laurel High School buy bleachers another year. They have also given money to the Laurel Library.

The club also gives an annual $1,000 scholarship to a local high school senior toward their future education. Priority is given to any senior who has actively helped with their fundraisers. After that, applications from students related to club members are considered as well as anyone considering an agriculture major.

And then there’s the local Little League organization. “We usually donate every year to Little League members,” said Tom Wright, treasurer of the Laurel Ruritan Club. He said they give enough money to sponsor a team.

And then, the Good Samaritan Aid: “We give them money to use at Christmas,” Wright said.

Then there were the new basketball courts at North Laurel Elementary School. The Ruritan Club donated “big money” to the Laurel Lions Club to help make that happen. Not many knew of that generous donation. “You don’t always get credit,” said Wright. But this club does not toot their own horn. They just keep doing good.

A few years back, the club was contemplating a donation to the Laurel Fire Department to help them purchase an Automated External Defibrillator (AED). AEDs are used to send an electric shock or pulse to the heart to restore a normal heartbeat. In the weeks they were considering the idea, one of the Laurel Club members “fell out” on the floor of a Salisbury restaurant: his heart had stopped, according to Wright. The Salisbury EMTs brought him back to life with the AED. “He’s still alive and walking around,” said Wright. The club donated $1,000 to the Laurel Fire Department toward an AED shortly after the episode.

How does the club raise funds for their giving? By throwing two annual chicken barbecues: one on the Saturday of Memorial Day weekend, and the other on the Saturday of Labor Day weekend. “We have a grill that does 456 chicken halves at a time,” said Wright, who said they sell 700 barbecued chicken halves on each of those two days. “We have a following,” said Walker, who said they know how to grill their chicken just so.

Last year they charged $10 for each barbecued half chicken. They set up outside the TidalHealth building at 30549 Sussex Highway in Laurel.

Laurel’s Ruritan Club is comprised completely of men, though women are welcome, too. “Most of our wives aren’t interested,” said Walker, who said that the membership in the DelMar Club includes women.

Additionally, and a concern for the club, is that most members are of a senior age. ”We’re always looking for new members to help with community projects,” he said, noting that they need good workers. Wright, who joined the club in 1976, retired after 30 years of teaching at the middle school in Seaford in 1999.

The club meets the third Thursday of each month at the Centenary United Methodist Church at 200 W. Market Street in Laurel at 7 p.m. For more information, please contact Derby Walker at 302-875-7677.