Laurel officials received a preview of design plans underway to build a playground in Tidewater Park, a key component of the project known as the Ramble. The playground is planned to be built on the parcel of land located along Central Avenue, across from the Shore Stop convenience store and Pizza King Restaurant.

Scott Lean, a representative of the Austin, Texas-based firm of Kompan Playground Fitness and Solutions, the group expected to build the playground, presented the design plans for council’s approval during the Monday, Sept. 21, public meeting. 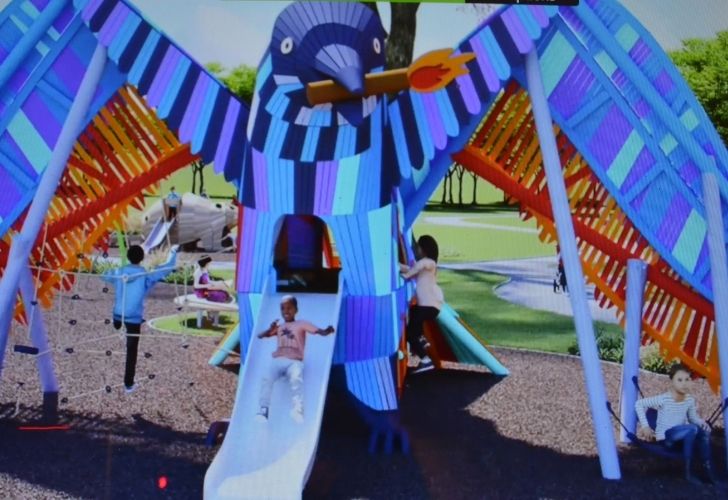 A model rendering of the “Rainbow Crow” that is considered the centerpiece of the design for the playground being planned for Tidewater Park. The playground will be part of the overall concept of the Ramble project being developed along the Broad Creek in downtown Laurel. The crow is part of the multiple playground activities that will pay homage to the folklore of the Nanticoke Indian Tribe. The crow will stand 16-feet high and have a width of 30-feet. Photo courtesy of Kompan Playground Fitness and Solutions.

He said Kompan is the largest manufacturer of playground and outdoor physical fitness equipment. It was just prior to Christmas that Lean said he reached out to Brian Shannon, Property Manager for the Laurel Redevelopment Corporation (LRC), after having seen plans being considered for the development of Tidewater Park. While he felt the plans were well designed he also felt there were some details that were not being considered that could make the playground even more assessable and impactful for the community.

Lean traveled from his home in Delaware County, Pa., and met on site with representatives of the Ramble committee. “I have three little girls who love playgrounds, and I have a passion for what I do,” Lean said. “The original design plans for Tidewater Park were very good, but I saw opportunities to make some design changes that will impact the space utilized for children and also support economic development for the Laurel community.”

The result, according to Lean, is a playground designed to reflect the unique character of the greater-Laurel community. “No other playground on the entire planet looks like this and will offer what this playground has to offer,” he said. “This provides value for the community and the public, both local users and visitors. This will be the centerpiece of the Tidewater Park and Ramble project.”

He said the playground will focus on availability to users, including adhering to all ADA (Americans with Disabilities Act) compliance regulations and providing parent-friendly amenities. “This will be a destination playground and attract people from within and outside the community,” Lean said. There will be walking trails and shaded seating. Most play space is within a manageable area to provide clear visibility for parents, especially those with multiple children.”

He also said there would be open spaces and amenities that can allow for special events such as “movie nights,” and accommodate drive-up lunch trucks.

The four activity sites will have oversized playground equipment representing each of the animals, including a “Rainbow Crow” activity that stands 16-feet high and is 30-feet wide. The activity centers also include folklore narratives explaining the significance of each animal to the legends of the Nanticoke Indians.

Town Manager Jamie Smith said efforts have been underway to seek funding to support the playground project and said taxpayer funds are not being considered for the project. She said the cost of the project as presented by Scott Lean and Kompan is estimated to be about $900,000. Recently the town was given approval to apply for state park funds in the amount of $100,000 that would be a matching grant. Together with the match and funds being earmarked by state legislators Rep. Tim Dukes and Sen. Bryant Richardson, those funds, if awarded would account for about $260,000.

Laurel resident Richard McVey questioned the town about who was ultimately responsible for the cost of the playground, and was concerned that there appeared to be no public input in the decision made by the Mayor and Council to support the project.

Town Manager Jamie Smith said the playground project is being considered for town property, so it will be a town project. She said, however, it was made clear at the start of project discussion that taxpayer dollars would not be used to pay for any part of the project.

She said the town is in collaboration with the Reimagine Laurel Committee, which also involves the LRC. “We are looking at a number of grants that could fund this project,” she said. “Some of these require they be submitted by a 501-(c)(3) non-profit. The town is not a non-profit, so we will work with non-profit organizations like the LRC and Rotary who are able to apply for those funds.”

Smith said it was important that the Mayor and Council endorse the playground design plan, which along with the cost estimate, is needed in order to move forward with making application for project funds.

McVey said he is troubled by the fact that the town endorsed moving forward with the playground plan without what he perceived as any input from the public. “Tonight the council gave its blessing on moving forward with this project as presented,” McVey said. “Is this going to be put out to the public to get input on the design before it moves forward?”

Mayor John Shwed said the playground design has been under discussion publicly over the past five years. He said a variety of designs have been considered during that time.

McVey questioned whether “this specific design presented tonight” will be shared outside the council chambers in order to get public input before moving forward. Council President Chris Calio said the meeting was open to the public and anyone could have attended through the advertised virtual “Zoom” platform and offered comments. He then asked McVey if he had “any problems with the project design.”

McVey said he did not feel it mattered because although he attended the meeting the decision was made to endorse the project prior to the “public comments” portion of the meeting. “Are you willing to reverse your decision if I had a problem,” he asked. To which Mayor Shwed replied, “No.”

McVey went on to say he personally does not have a problem with the project and feels it is “a very good design plan.” However, he feels this was something that should have been made available to the public to allow comments. “I would just like to see the public given the opportunity to be involved in a decision like this before the decision is made,” he said.

Shwed responded that the public has had the opportunity to be involved “over the past several years.” He went on to say that he does not believe members of the public will have any problem with the playground design that was endorsed by Mayor and Council.

Brian Shannon pointed out that five years ago during a special outdoor Ramble event, patrons were asked to respond to a survey seeking ideas for the Ramble project. He said the input from that resulted in a majority of the people seeking to see a community park and playground concept. Follow up community meetings with the Ramble coordination group led to the idea of incorporating local history in the Tidewater project and striving to make the recreational activities also be a source of education. The tribute to the Nanticoke Indian Tribe came out of these discussions.

Town Manager Smith said she has a copy of the design presentation that was presented by Scott Lean and she welcomes any member of the public who may wish to review it to let her know. “If there are any major concerns expressed by the public I will bring them back to Mayor and Council and they are able to make changes. This project is certainly not ready to break ground tomorrow. We have time to address any concerns before we secure the entire funding we need to start,” she said.