The Laurel High graduation will now take place June 17 at 6:30 p.m. in Laurel Stadium (rain date June 18). There will be two jumbotrons outside the stadium for one car per family to watch from the parking lot. Students will also be able to admit four guests who will sit together and be socially distanced from other guests. Seats will be marked in the home and visitor stands as well as on the track. There will also be a jumbotron inside the stadium. All other social distancing and safety measures will be observed.

If nothing else, the Laurel High class of 2020 has learned to adjust to changes in circumstances. After missing the spring sports season, the prom, and other big events due to COVID-19, the seniors were prepared to celebrate their graduation with a drive-in graduation and a pre-filmed graduation walk. Following Governor John Carney’s announcement on Monday that outdoor events with up to 250 people can be held starting June 1, the Laurel School District is going to plan C.

On Monday night, Superintendent Shawn Larrimore announced on Facebook that the district is looking to get approval from the Delaware Department of Education and the Division of Public Health to exceed the 250 person limit for the graduation ceremony. With 130 graduates, even if the seniors only brought one guest to the commencement, it would exceed the 250 person limit. While that permission is pending, the district is moving forward with plans to hold an outdoor ceremony on June 18 with a rain date to be determined. 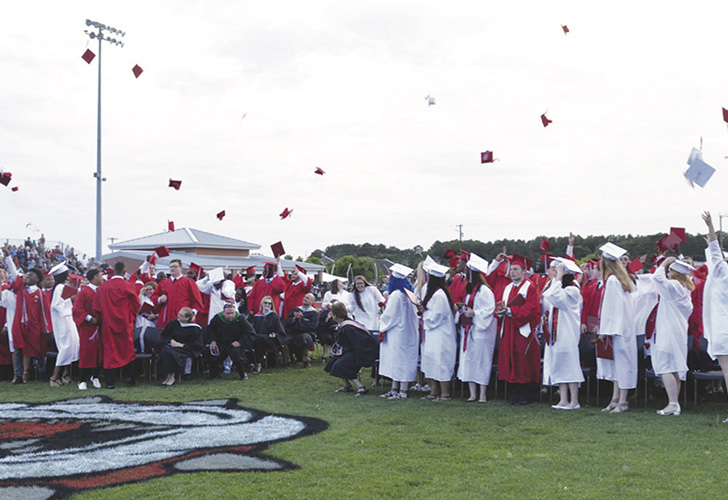 Shown is a scene from last year’s Laurel High School graduation. Following the Governor’s announcement on Monday that groups of up to 250 people could assemble starting June 1, the Laurel School District plans to hold this year’s graduation ceremony in the high school stadium as originally planned. What is still up in the air is how many spectators will be allowed in the stadium. The district will have jumbotrons in the parking lot for guests to watch the ceremony from their cars. Star File Photo

Under the previous state guidelines, gatherings were limited to 10 people or less as a result of the pandemic. In order to comply with this mandate, the Laurel School District planned to rent three jumbotrons to be located outside of the high school stadium. Each senior was going to be given two vehicle tickets, a white one to park in the student parking lot and a red one to park in the faculty parking lot, with all attendees required to stay in their vehicles.

“We want all of our kids to have their moment in the sun,” Laurel High School Principal Dave Hudson said in an interview Monday morning.

The plan was to record the graduation walk June 1, 2, and 5 with only five students allowed in the school at a time, along with two guests each to film the walk. The district also planned to film the valedictorian and salutatorian speeches at different times. A video would be put together with the walks, speeches, a greeting from high school teachers, and a tribute to the class of 1970. That video was going to be shown on graduation night and Hudson and Larrimore planned to speak live. The event would also be live streamed on Facebook.

“It is quite a production. There have been a lot of steps,” Hudson said. “We’re just trying to make the best of this situation as we can. We wanted a way to share the graduation with as many people as possible.”

Now that gatherings of 250 people will be allowed next month, Larrimore said the district no longer plans to film the graduation walk, instead the outdoor ceremony is back on. Seniors will be seated on the football field, six feet apart, and guests will be allowed to sit in the bleachers at that same distance. No guests will be allowed to stand at the fence during the ceremony and bathrooms will not be available to the public. Following measurement of the stands, which was scheduled to take place Wednesday, and if the approvals are granted, the number of guests each graduate can have will be announced.

The district also plans to use the leased jumbotrons with one of them to be placed inside the stadium and the other two to be located in the parking lots. Guests not able to watch the ceremony in the stadium (due to capacity limitations) will be able to watch it on the jumbotrons from their cars.

The district recommends that all elderly family members view the ceremony from their vehicles or on the livestream from their homes. All vehicles entering the campus on the day of graduation will need a ticket.

While a number of milestone events have been cancelled this year due to COVID-19, Hudson said the biggest disappointment for seniors may be that they did not have the opportunity to go to school for the last time, since the school year was halted in March.

“They had no idea that would be the last time they would ever attend Laurel High School,” said Hudson. “There are things in life that you have no idea how big the moment will be until it happens.”

In his speech to the graduating seniors, Hudson plans to encourage them to consistently have the attitude of kindness and compassion.