Bulldogs win Lions trophy for the first time since 2015

The Laurel varsity football team continues to do things the program hasn’t done in awhile, including defeating Delmar for the first time since 2015. Last Friday night’s 42-13 home win moved the Bulldogs to 10-0 on the year while the Wildcats fell to 4-6. Both teams will begin state tournament play this week.

“This was another one that we as a program wanted and needed,” said Laurel head coach Joey Jones. “It’s exciting to do what we set out to do.” 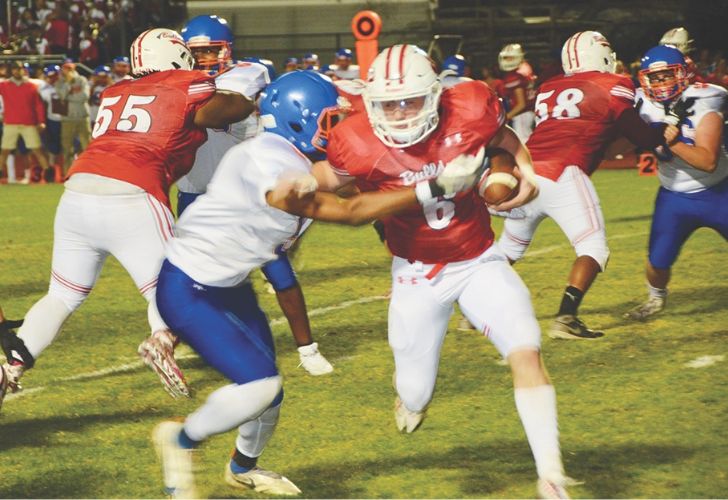 Laurel scored on the game’s opening series, starting with the ball on its own 30 yard-line. Kyle Wilson had a 23-yard run, Mike Belle picked up four yards on third and two from the Delmar 27, and Kaden Shockley ran 24 yards for a touchdown on fourth and 11. Mike Gonzalez-Perez booted the extra point for a 7-0 Bulldogs’ lead with 6:20 left in the first quarter.

Delmar’s offense moved the ball down the field on its first possession as Gavin Powell completed a 20-yard pass to Brandon Turner and Jalen Johnson added an 18-yard run. Powell’s pass fell incomplete on fourth and three from the Laurel 15 to give the ball back to the Bulldogs.

Laurel’s Tate Walls took a pitch and scampered for a a 58-yard run. Walls scored on a six-yard run at the start of the second quarter (11:54) and Gonzalez-Perez added the PAT for a 14-0 advantage.

Delmar began its next offensive series on its own 45. Powell completed a 14-yard pass to Johnson on third and 10 from the 45 and later found Turner for a 21-yard pass on third and three from the Laurel 34. The Bulldogs’ defense gave the ball back to the offense following an incomplete pass on fourth down.

Delmar’s Takai Hugee returned a Laurel punt to the Bulldogs’ 16 and later scored on a six-yard touchdown run on fourth and inches. Nathan VanZandt kicked the extra point to make the score 14-7 with 4:19 left in the first half.

Laurel answered with a scoring drive as Wilson had a 15-yard run and Shockley added runs of eight, 10, and nine yards. Wilson scored on a 10-yard run and Gonzalez-Perez added his third extra point of the night for the 21-7 lead with five seconds remaining.

Delmar opened the second half with the ball on its own 35. Powell completed a 28-yard pass to Johnson on third and nine, but Laurel’s Brady Lee broke up a pass on fourth and 11.

The Wildcats got the ball back following a Bulldogs’ punt, but Laurel’s Xavier Limehouse recovered a fumble and ran it back 47 yards for a touchdown to help his team to a 28-7 advantage with 32 seconds left in the third quarter.

Wilson added a 30-yard touchdown run with Gonzalez-Perez booting the PAT to increase Laurel’s lead (6:49). Delmar freshman quarterback Ayden McCauley answered with a 73-yard touchdown pass to Hugee a little over a minute later for a 35-13 score.

“Now you don’t have time for slip-ups. You have to show up and play,” said Jones.