The Laurel varsity field hockey team rallied from a 1-0 first half deficit to knot the score in Tuesday’s home and season opener against Sussex Central, but the Knights came right back to score the game-winner on a penalty stroke.

The Bulldogs opened the game with a pair of penalty corners before Sussex Central answered with two corners. Laurel’s Sidney Hastings later made a defensive save before the first period came to a close. 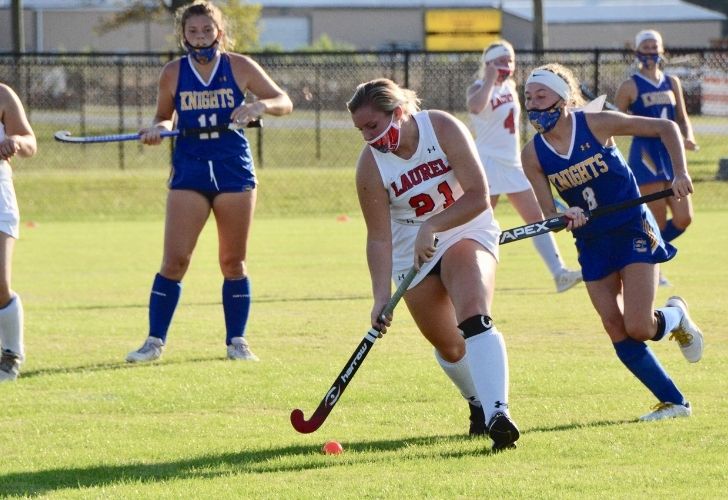 Laurel senior Kaegan Brittingham dribbles the ball away from the Laurel goal during Tuesday’s game against Sussex Central. Photo by Mike McClure

Laurel eighth grader Peyton Miller took a shot on goal, which was turned back by the Golden Knight goalie. Laurel goalie Lucy Rawlings made a save on a Sussex Central shot with 9:30 left in the first half.

Rawlings turned back another shot, but the Golden Knights drew a penalty stroke. Sussex Central sophomore Aniyah Briddell scored on the stroke for a 1-0 lead with 7:03 remaining in the half.

Laurel senior Elya Niblett took a pass from Peyton Givans on a corner, but her shot went wide left. Sussex Central took a 1-0 lead into the half.

The Knights came out firing at the beginning of the third quarter as Rawlings made a save. Laurel senior Kaegen Brittingham made a defensive save on Sussex Central’s second straight corner.

Givans took a shot on goal and Niblett’s shot went wide on a Laurel corner. Rawlings and Carlie Venables made stops for the Bulldogs to keep the score at 1-0 through three quarters of play.

Following a Sussex Central shot and a save by Rawlings, Niblett’s shot on a corner went wide left and her teammates were unable to redirect the ball into the goal.

Niblett and Couri Smith hustled back on defense and Smith broke up a Sussex Central break, leading to a break for the Bulldogs. Givans followed her own shots to score the game-tying goal with Smith picking up the assist (6:53).

The celebration was short-lived as a pileup at the goal led to another Sussex Central penalty stroke. Briddell once again found the net with 6:16 left in the contest to give her team the 2-1 lead.

The Bulldogs continued to battle, but the Golden Knights came away with the 2-1 victory.