Since acquiring the Paul Laurence Dunbar Elementary School building from the Laurel School District three years ago, Laurel town officials have set sites on transforming the majority of the building space into a new home for its police department. 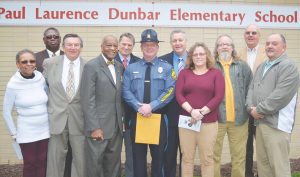 The Paul Laurence Dunbar Elementary School building was conveyed by the Laurel School District to the town for its new police station during a ceremony in February 2019. Star File Photo

The Laurel Mayor and Council have pledged that the work to renovate to prepare the building for the police department would not be funded by tax payer dollars, but rather grants and other financial contributions.

During the Tuesday, Jan. 19 meeting of Mayor and Council, Councilwoman Cheryl Martin urged colleagues to consider forming a committee that could discuss potential options to help get the police department into the building sooner, rather than later.

Martin made reference to a project in Milford that has the town seeking $20 million to build a new police station through a referendum. Milford officials hope to fund the project via a $20 million bond issuance to be paid back over 30 years that would see property taxes increase by 0.115 percent.

Mayor John Shwed pointed out that there are significant differences in the city of Milford and the town of Laurel. “The city of Milford is a huge city with a lot of wealth investment,” he said. “That is a major factor in Milford’s decision and would be a factor for Laurel.”

Martin made it clear that it was in no way her intention to suggest that the police department project overburden the town’s taxpayers. “I am not talking about Milford. I am talking about Laurel. I am not interested in mirroring Milford,” she said. “What can we do in Laurel to help facilitate the construction of the new police department? What can we do that will not overburden our taxpayers, but help to get out police officers into a better working environment than they have at present? I am willing to convene a commission, or committee to discuss this,” she said.

In September, Town Manager Smith reported to mayor and council that she and Police Chief Dan Wright have estimated that the funding necessary to enable the police department to move into the Dunbar building is about $200,000. She said the town is seeking grant funding to offset the costs, including funding Chief Wright was successful in acquiring to have video surveillance cameras installed around the building.

Prior to the COVID-19 pandemic, the town had the support of State Rep. Tim Dukes in submitting a $700,000 request in the most recent Bond Bill. However, the pandemic created financial issues for the state that led Dukes to feel less confident about the town receiving that amount of funding. Smith said Dukes told her that nonetheless, he would submit the request. Ultimately, the Laurel request and a number of other requests across the state were not supported in the Bond Bill.

The town has received Bond Bill money that was earmarked for the Dunbar project, but Smith said due to the deterioration of the building’s roof over its three years of vacancy, the money was used to repair the roof. She also explained that the single largest cost in the upgrade comes by way of compliance issues stemming from the State Fire Marshal’s Office inspections. “We currently have two firewalls in the building, but the fire marshal said we will need to build a third firewall to separate the police department from the Children & Families First classrooms,” she said. “This will enable us to forego the need for additional sprinkler system.”

Efforts to seek USDA rural development funding through the federal government were thwarted when the town was informed that this type of funding would come in the form of a loan, and not through a grant.

Martin said she wants active discussions to convene to examine not only grant funding, but other opportunities that may exist to create financial sources, “but not overburden our taxpayers.”

Shwed agreed that an internal committee could be developed to discuss financial options for the new police department construction project. He suggested that committee be comprised of Martin, Town Manager Smith, Police Chief Wright and Town Finance Director Mary Intracaso.