The Laurel varsity boys’ basketball team entered last Thursday’s road contest against Lake Forest looking for a win to clinch the Henlopen South title. The Bulldogs needed a win over the Spartans, who recently upset Woodbridge to give Laurel sole possession of first place, while a loss would have forced a playoff between Laurel and Woodbridge. Laurel earned a 65-58 victory over Lake Forest to earn the program’s second division championship and set up a battle with Dover for the conference title this Friday.

“The last few games have been a little tough,” said Laurel head coach Kevin Walmsley. “They kept to it, they kept running the offense and defense and won it at the end.” 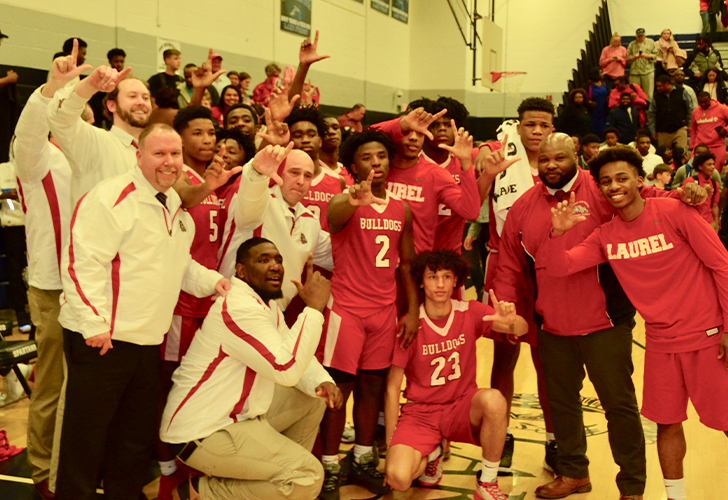 “It feels great. I couldn’t do it without my team and my fans and my coaches,” Laurel’s Javier White added.

Lake Forest freshman Tyrone Tolson netted four points to give his team an 8-4 lead early on. White converted a three-point play on a feed from Kylse Wilson, Corey Mumford netted four points, and White pulled down a rebound and threw an alley-oop to Donatarius Jones for a 14-8 lead. Tolson made a layup at the buzzer to pull the Spartans within four. Mumford led the Bulldogs with five first quarter points and Jones added four.

Lake Forest’s Jaysem Vazquez netted four points at the start of the second quarter to make it a one point game. White made a long three-pointer to extend the lead, but Tolson answered with a three-pointer and Vazquez added four points for a 22-19 Spartan lead.

Wilson made a steal and hit a pair of free throws and Nifere Griffin scored off an offensive rebound to put Laurel ahead by one. Mumford knotted the score at 25-25 before Lake Forest’s James Sims scored on a putback at the buzzer to out the Spartans up by two going into half-time. White tallied a team-high five points in the second quarter and led the Bulldogs with eight first half points while Mumford added seven points.

Wilson made another three-pointer and dished out an assist to White for three to give the Bulldogs a brief one point lead with 3:59 left in the quarter. White and Wilson each made a three-pointer and Jones scored on a cutback for a 47-43 advantage through three quarters of play. Wilson paced Laurel with nine third quarter points and Jones and White each added six.

Jones scored four points early in the fourth quarter to put the Bulldogs up by five points. Jones made a pair of free throws and Mumford added one foul shot to extend the lead to eight before Lake Forest’s Reginal White made a three-pointer.

Wilson converted three of four foul shots and Jones and B.J. Malone each added two points to help Laurel hold on to win, 65-58. Jones scored eight of his 18 points in the fourth quarter while Wilson added five.

“It feels great, we worked as a team,” said Wilson, who had 16 points and three steals.

“We locked down on their best player. It (defense) helped us get transition points,” White, who contributed 14 points and nine rebounds, added.

Jones netted 18 points and pulled down five rebounds and Mumford added 10 points and seven rebounds for the Bulldogs.

Laurel fell to 2-2 following a blow out loss to Woodbridge and battled back, winning 16 straight including Thursday’s regular season finale.

“This coaching staff that I have is top of the line,” said Walmsley.

One of Walmsley’s assistant coaches, Chris Horsey, was on the 2003 Bulldogs team which won the program’s first division title in 2003.

“It’s a little different feeling coaching these young men,” Horsey said.“At the end of the day I’m a Bulldog.”