The Seaford football team is taking a step to success, redevelopment, and an investment in the future of the program with the hiring of former Sussex Tech head coach and Delmar assistant coach Mark Quillin. Quillin has a coaching resume that not only spans 30 years but also has a proven record of leadership. He was the 2014 Henlopen North Conference Football Coach of the Year as well as the Delaware State Football Coach of the Year. Quillin led the Ravens to a conference title in 2014 after only two seasons as the Ravens’ coach.

The resume of coach Quillin includes football, wrestling, baseball, and lacrosse. After graduating from Towson State University with a BS in Physical Education, Mark coached JV football at Towson High School and then was part of a staff in the first year athletic programs at Western Tech. In 1997, he coached under coach Joe Rotellini at Salisbury State University and then took over head coaching duties for basketball and wrestling at Mardela High while at the same time coaching JV football at Wicomico High. 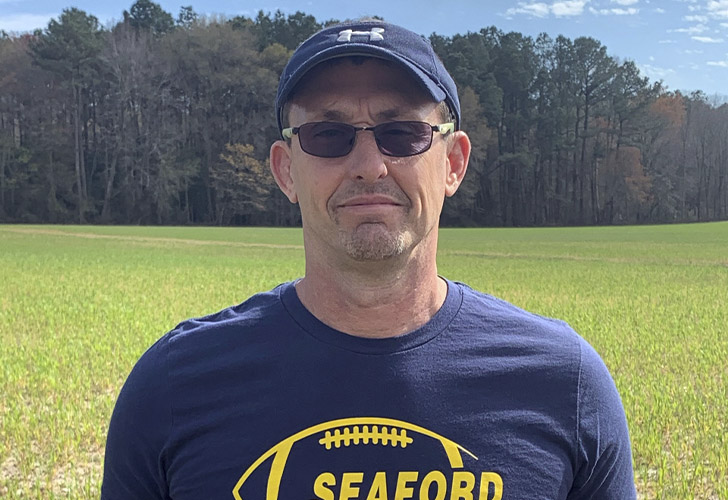 Coach Quillin returned to SSU for one season under coach Sherman Wood then went to Delmar Middle/High School in 2002 and was on staff for football, wrestling, lacrosse and became an AFPA Certified Personal Trainer. Additionally, in his tenure at Delmar he was Henlopen Conference Lacrosse Coach of the Year in 2008. He also served as the Wildcats’ head wrestling coach. In 2012, Quillin made the move to Sussex Tech as assistant lacrosse coach and assistant football coach until he took over as the Ravens’ head football coach in 2013.

Coach Quillin discussed the biggest question he has been asked since the rumors started of the possibility of him coaching in Seaford. “I have had a chance to meet many of the upstate coaches and many texted me and said, ‘What are you doing going to Seaford?’,” Quillin said. “To be honest, I am really looking forward to it and very excited. I missed being in a community school atmosphere.”

Quillin reflected on his years as an assistant to Delmar head coach Dave Hearn, “I really enjoyed the opportunity to be at Delmar.”

Coach Quillin is taking over a program that in the last 10 seasons won 15 games with an overall record of 15-96.  Quillin said, “I want to turn the program around, Seaford has some great athletes in the school building.”

The support of the community and school are crucial, “I work in the high school and am able to be in the halls and cafeteria so I can work on the relationship and get the kids interested,” he added. “I recognize the record has not been great and they are apprehensive. It is my job to build the relationship.”

In order to bring the athletes to the game, Quillin is relying on support, “Luckily Seaford has some great faculty members working as advocates who want to help. There are coaches in the building who want to be part of the coaching staff and I am receiving tremendous support from the administration.”

Although coach Quillin has not yet finalized most of his coaching team one Seaford alum is coming home. “Seaford football alum Clint Dunn is on my staff. We had spoken several times the last six years and Clint told me that if I ever had the opportunity to go to Seaford he would like to go back,” said Quillin.

The staff that will surround coach Quillin is vital to the future of the program. “One of many things I learned from being around coach Hearn for 15 years is that coaching is a 12 month job and good communication is important,” Quillin said. “I like when coaches are involved in multiple sports, we are all working together for same purpose.”

Just as important is to mend the seams with the middle school and coach Quillin recognizes the strength of middle school program comes from the coaching staff. “I met coach Long and we see football similarly, he is very structured, organized, and disciplined. Assistant Justin Gillette played for me at Delmar and I have known him for years, Assistant Jamie Jarmon played at Indian River High School and it was so difficult to coach against him,” said Quillin. “We had an eighth grade meeting scheduled but the schools were closed and I look forward to meeting the kids when we get back together.”

Coach Quillin believes it will take small victories for Seaford, “Doug Fleetwood (Salisbury University football coach) once told me one of the most difficult things to do is to overcome long-term adversity over winning and losing. Kids come to believe you are supposed to lose to certain schools,” Quillin said. “There will be a game this year that we are not supposed to win and we will win. That win will hopefully turn that switch and have the kids believe that they are just as good as any other team in the Henlopen South. Seaford can be there, the kids are just as talented, we just have to do some things to make us better.”

The pride from the community and pride within the school will bring forth a winning attitude. “Nine years as a coach at Sussex Tech, one thing that lacked the most at Tech is the one thing that will make Seaford special is the sense of community. I want to make sure I help make that happen in Seaford, I want the people who come to the games to bleed blue and gold. I want to see the whole community come out to the football games again and the businesses shut down to attend like they did years ago.”

Coach Quillin said he recently stepped into The Pit and felt the tradition of Seaford football, “The day after I was approved as the coach, I went down and was cleaning and organizing. I found a lot of memorabilia and some treasures of the past that Cap Dick left behind that will be put up inside The Pit so the kids will realize the tradition that is inside Seaford. Clint (Dunn) shared some stories and I could see the excitement in him and emotions as he spoke, this is such a special place to see the tradition every single day.”

Coach Quillin said good communication, keeping kids in Seaford, developing a winning attitude, bringing in the right staff, and developing a mental aspect of the game are all first-year goals. “We need a JV program. It is very important. We need to become competitive as possible every game. There are great kids in Seaford who are very athletic and can get that passion for football.  We need to get them stronger,” he said. “Pre-season practices will be in the evening this year when it is cooler, easier for kids to get there, it will give time to communicate with coaches if they need help getting to practice, provides freedom to work during the day, and non-teaching coaches can get to practice.”

Coach Quillin is ready to get to work but the recent events have interrupted all sports and practices, “Social distancing is pulling us away so I am using some social media to keep in touch. I sent a letter out to players to let them know even though we are going through tough times we have something to look forward to and get excited a football and going in the right direction.”

Football season could bring a new excitement to the town of Seaford. “A lot of people don’t want to believe it but football sets the tone and we open with IR on a Friday night. We want to begin with bringing everybody out the game,” said Quillin.

So why Seaford? “Sense of community and I am really excited,” Quillin said. “This is my 30th year as a coach and I think this is a hidden gem and we can change some lives and win some football games.”

Coach Quillin, while in The Pit believes he received the stamp of approval. “I went down to The Pit and the first thing I picked up was a 1983 state championship banner, the edge was hanging down and when I opened it; It gave me chills, Cap Dick is smiling down on me. Everything happens for a reason.”