The Laurel Police Department conducted its first Citizens’ Police Academy recently and participants were on hand at town hall to express their appreciation for the program. The eight-week program was held beginning on March 3, at the Laurel High School. A graduation ceremony was held on May 3 at Laurel Pizzeria.

On Monday, May 16, the graduating class attended a public meeting of Laurel Mayor and Council. At the meeting Mayor John Shwed commented that he was able to participate in some of the Academy classes. 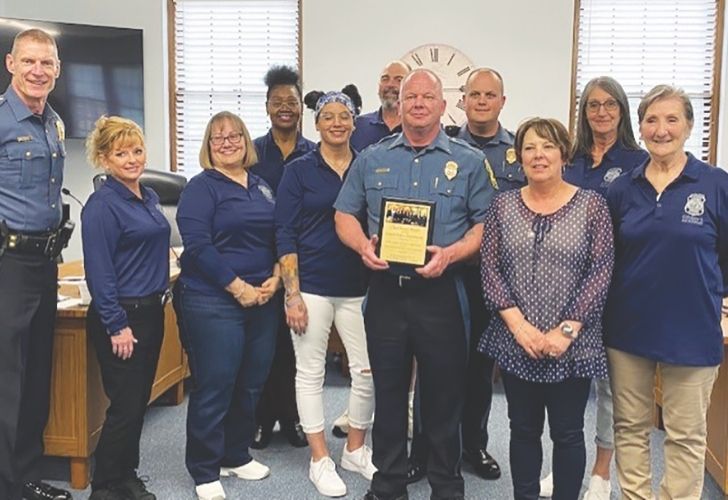 Members of the first graduating class of the Laurel Police Department’s “Citizen’s Police Academy” presented Laurel Police Chief Dan Wright (center), Capt. Rob Kracyla (far left) and Lt. Tyler Bryant (back row) with an appreciation award for their efforts in developing the Academy and the overall work of the entire police department in the community. The presentation took place at the Laurel Mayor and Council meeting on Monday, May 16. Photo courtesy of Jamie Smith

Shwed expressed appreciation for the participation of the members of the class of Academy graduates and their “willingness to support the police department.” He said the Citizens’ Police Academy allows an opportunity to promote the work of the local police officers. “I believe that the Laurel Police Department is one of the finest police departments in the United States. These officers are a well-functioning team and they are on the job to protect and serve,” he said.

She said the value of educational experience gained from the Citizens’ Police Academy was significant, but she felt the opportunity to get to know and understand the job of the local officers was even more rewarding. “Most importantly, as a community were able to establish a great rapport with each other and our officers,” Carey said. “We were able to see almost first-hand what our officers do daily and gain an understanding of law enforcement policy and procedures, and know more about what goes into the decisions they must sometimes make in the field.”

Carey said it is imperative to law enforcement everywhere to have their community’s support behind them. She said the formation of the “Citizens’ Police Academy Alumni” will be a resource to support the Laurel Police Department during community events, upcoming Citizen Police Academies, and “anything they deem us fit for.”

Carey said her role as president of the Citizens’ Police Academy Alumni is to serve as a liaison between the police department and the Academy alumni. She said her first act as president is on behalf of her fellow first class graduates, to present Laurel Police Chief Dan Wright, Capt. Rob Kracyla and Lt. Tyler Bryant with a special appreciation award to honor their efforts in hosting the Citizens’ Police Academy.

“This is in recognition of your hard work and dedication to not only our graduating class, but to the entire community as well,” Carey said. “The Laurel Police Department is appreciated, and as always, ‘we back the blue.’”

Kracyla, former Seaford Police Chief, joined the Laurel Police Department in 2020. One of his first requests to Chief Wright was to bring a “Youth Police Academy” program to Laurel. He had launched the program while in Seaford and Wright supported the project for Laurel youth. The youth program was introduced last year.

Wright and Kracyla then set out to develop an adult citizen’s academy, much like one that has been sponsored or a number of years by the Delaware State Police.