Even though it was originally planned outside, hot temperatures and threats of storms forced the Laurel Public Library to be more creative regarding their “Family Picnic,” held last Saturday from 11 a.m. till 1 p.m. Patrons were encouraged to still bring a blanket, and find a place on the floor to enjoy music, crafts and food at the community room of the library.

Youth Services Librarian Stacy Lane greeted guests at the entrance with tickets for a chance to win prizes, one of them a $50 gift card to Royal Farms. Guests were also treated to a ticket which allowed them to receive a boxed lunch, courtesy of Panera’s. “We’re trying to put a focus on families to eat healthy and to spend money wisely,” said Lane. “We had a little bump with the excessive heat, but I’m so glad to provide a space for families, here.” 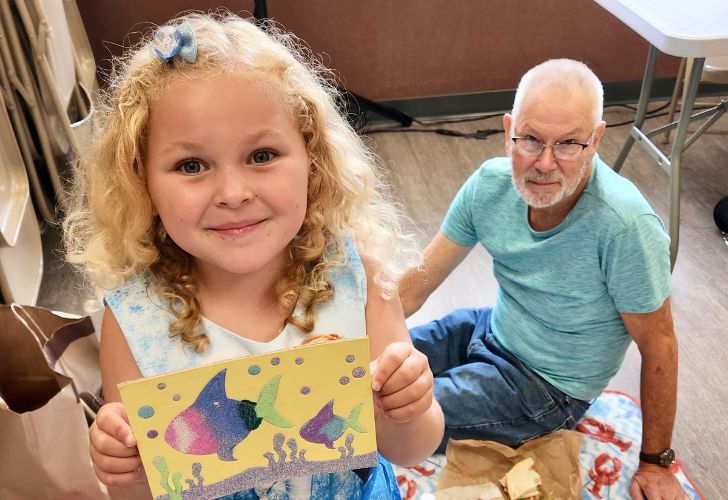 Roger McGrew of Laurel is shown with his granddaughter, Ally, last Saturday at the Laurel Public Library. Photo by Rebecca Jones

Also, attendees were greeted to a table loaded with tomatoes, squash, watermelons, corn and other produce. “The local produce you see there is from Little Evan’s Farm,” Lane said. So that others could partake in the bounty, there were caps on how much fresh veggies you could take home. Some walked away with the allotted amount, others took less. Manning the table was Lane’s mother-in-law and daughter, Pam Lane and Annette, respectively.

At another table children busily worked on sand art, featuring ocean figures, as well as red foam hats that resembled either a lobster or a crab, depending upon the crafter. Some of the children giggled as they attempted to place googly-eyes on their creations. Laurel Library volunteer Anna Singh kept things running smoothly at the craft table. On an information table not far away were resources regarding better eating habits and more.

As a local disc jockey provided music for the patrons, a man and his granddaughter sat upon a blanket, smiling and eating their lunch. Roger McGrew of Laurel and his granddaughter Ally have been participating in the summer reading program throughout the entire summer. “I live just around the corner from the library,” McGrew said. “We come every Wednesday for storytelling. Stacy (Lane) does that.”

McGrew said his granddaughter had spent the summer with him and his wife, Linda. “Yeah, little Ally will be going back home soon. She’ll enter kindergarten this year. But this has been an amazing summer. She spent a lot of time with books, and she’s enjoyed coming here every week,” he said.

“It’s a safe and fun environment here,” McGrew noted. “They’re all sweet and friendly people. The children have fun with crafts and reading. I know she had fun making that crab hat and card.” A resident of Laurel for 11 years, he added, “We’ve been coming here for years. We always enjoy it.”

Anna Lees, an employee at the Laurel Library, manned the lunch table with help from her partner, Dylan Glos. “I think Panera sent approximately 100 sandwich boxes,” said Lees. There were two options of sandwich subs available – Turkey and Mediterranean Veggie. Also in the boxes, patrons would find a fresh apple, as well as a cookie. Water or juice boxes were also available for guests.

“We’re starting to do more events that involve families to promote quality time together,” said Lane, “and to promote healthy eating habits.” Lane stated her pleasure regarding the first in-person sets of library programs since COVID. “It was our first ‘big, normal’ summer. It’s been a great year.”

The end of summer programming will be topped off with a huge gathering on Wednesday, Aug. 17 from 2 to 3 p.m., featuring end of year prizes, along with the arrival of an ice cream truck.