Riding a bicycle is not only a great way to help the planet by reducing vehicle emissions, but it’s also an ideal physical activity. According to Harvard University, biking at a moderate speed of 12 to 13.9 miles per hour will cause a 155-pound person to burn 298 calories in 30 minutes. At a faster rate of 14 to 15.9 miles per hour, a person of the same weight will burn 372 calories. 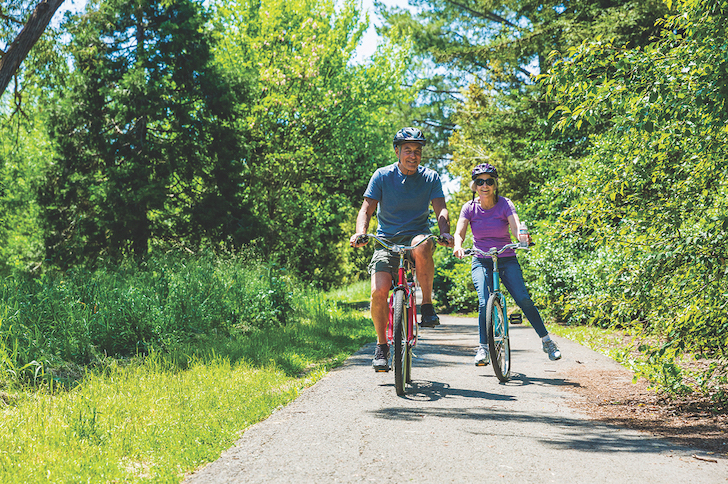 People can ride bikes at any time of year, but cycling is most popular when temperatures are moderate and precipitation is low. Bike riding has always been in fashion, but it experienced a boost in popularity when people were asked to remain socially distant for COVID-19. Walks and bike rides at a safe distance from others became popular and accessible ways to get fresh air and exercise.

Anyone who rides a bike needs to take certain precautions. Cyclists often share the roads with large and powerful cars and trucks. The National Highway Traffic Safety Administration warns there were 857 cyclists killed in traffic crashes in the United States in 2018. Safety is a two-way street, requiring diligence by drivers and bike riders.

• Bike riders should be dressed in bright clothing so they can be seen. A well-fitting bicycle helmet is a must, and should be worn every time a bike is ridden.

• Equip your bike with a horn, bell and bright headlight.

• Cyclists should ride in the same direction as traffic on the far right-hand side.

• Ride a bike that fits you well. If the bike is too big, it can be difficult to control.

• Carry items in a backpack or strapped to the back of the bike so belongings do not become obstacles.

• Drivers should remain alert of cyclists sharing the road and give wide clearance when possible.

• Vehicle drivers should look in their side mirrors and around them before opening car doors so they do not accidentally knock a cyclist passing by off the bike.

• Safe Kids suggest using hand signals to alert others to your plans. Cyclists can extend the left arm out for a left turn; make a 90-degree angle with the left arm to indicate a right turn. Putting the left arm down with the palm facing backward indicates stopping or slowing.

Cycling safety is important as temperatures rise and more cyclists are on the road.