“An enthusiastic, creative and skilled classroom teacher”; a dedicated faculty mentor” and “a champion of international education opportunities for students” – this is how colleagues described this year’s Salisbury University Distinguished Faculty Award winner: Dr. Kristen Walton, professor of history and founding director of the SU Nationally Competitive Fellowships Office.

The prestigious tribute is given by faculty to faculty. 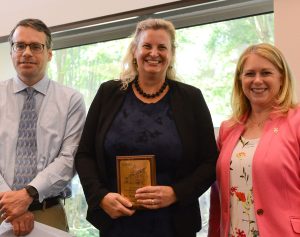 Since coming to SU in 2001, Walton as mentored and advised more than 500 students, many of whom provided support for her nomination.

Notably, under Walton’s leadership, the center has produced 27 Fulbright Students. She also has mentored more than 60 Fulbright Student semifinalists. Due in large part to her efforts, the U.S. Department of State and Chronicle of Higher Education have named SU among the nation’s top producers of Fulbright students for the past five years.

Her dedication to students has earned her one of the University System of Maryland’s highest honors: the Board of Regents’ Faculty Award for Excellence in Mentoring. She also has received SU’s Charles R. and Martha N. Fulton School of Liberal Arts Excellence in Research Mentoring Award.

Walton also has been an advocate for students studying abroad. She has also led a program for SU students in London and created an ongoing exchange program between SU and the University of Stirling, Scotland.

For those unable to study abroad, Walton works to bring international history to life in the classroom through creativity and engagement. For instance, students might walk into her classroom and find themselves face-to-face with Walton’s theatrical interpretation of an Early Modern queen or even Martin Luther.

A scholar of Scottish history, Walton has published multiple book chapters and articles, as well as a monograph with another in progress. She also has peer-reviewed books and articles for several publishers, presented numerous invited talks and guest lectures and served as the president, chair and a founding member of the North American Organization of Scottish Historians (NOSH).

Celebrating its 35th year in 2022, the Distinguished Faculty Award has been bestowed upon 76 faculty. Walton’s name will be added to an honor roll listing all recipients since the award was established.