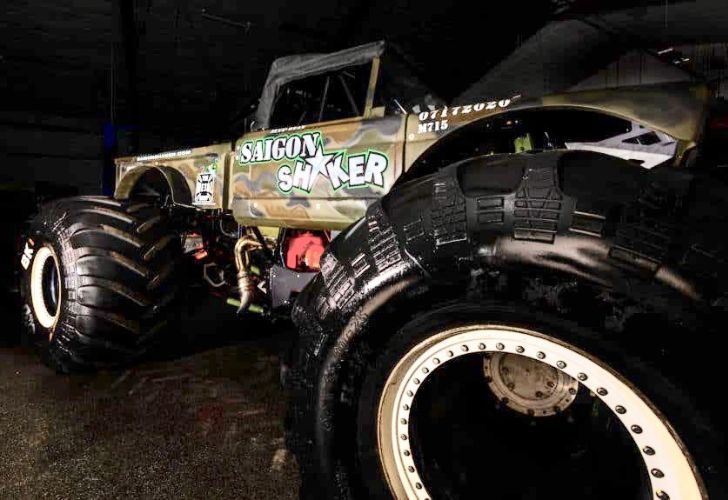 Pictured is the Saigon Shaker, named in honor of Vietnam Veterans.

Disharoon, of Delmar, Md., competes in shows across the country including Nashville, Tenn. and Cleveland, Ohio. Last weekend’s competition in Landover, Md. was like a hometown show for Ryan, who had a number of friends and family members from the Eastern Shore and Sussex County to see him in action.

“We’re letting it all out for this one,” Disharoon said prior to last weekend’s show. “I’m excited to put The Metal Shop and Saigon Shaker on the map.”

“I just picked the ones that are nearest to me,” he said.

This weekend (on Father’s Day) Disharoon will host Monsters of Metal at Delaware International Speedway. Eight trucks will take part in the show, including three from last weekend’s show at FedEx Field.

Disharoon has been taking part in the sport for eight years, including three years with Monster Jam, which he called the Major Leagues. He worked his way up to the series, filling in when he could and working his way up to Monster Jam. “It’s a very humbling sport,” said Disharoon, who placed ninth overall in his series.

Ryan, a 2009 Delmar High School graduate, started The Metal Shop with his dad and stepmom in 2007. The business builds monster trucks for people and does welding repair, fabrication, and customization of trucks.

Through it all, competing on Monster Jam and running the business, Disharoon says his wife, Amber, has stuck by him and has been his number one supporter. “She’s been there with me through thick and thin,” he said.

Disharoon also credits his dad, Rick, who also serves as his crew chief, for making it all possible. “It’s a family affair,” said Disharoon.

The workers at The Metal Shop also take turns serving as part of his crew. “It’s fun to go do. It’s hard work,” Disharoon said.

Disharoon’s daughter, Willow, will turn two years old in July. She saw her dad in action and was excited about the sport.

“She’s the reason I’m going to keep doing it. She was so pumped. She was into it, loving it,” said Disharoon. “This is something I’ve got to keep doing for her. I can’t stop.”

Ryan is also thankful for all the support he has received over the years.

“Without the fans to support me I wouldn’t be able to do this,” he said. “I couldn’t do it without everybody that has supported me over the years.”

Disharoon’s truck name, Saigon Shaker, came from his old Vietnam-era mud truck, a 1967 M715 military truck. He liked the army color look of it and decided to stick with the army theme, naming it after the capitol of Vietnam, Saigon. The shaker part came from the mud truck, which shook when it started up.

“It’s kind of like a tribute to the Vietnam veterans,” said Disharoon, who added that members of his and his wife’s family served in the military. “It’s our way of paying back.”