The Delmar varsity football team has a number of holes to fill from last year’s team, which went 6-0 in the conference and 9-3 overall, winning the Henlopen South. Among the key losses are Hunter VonArx, Jacob VonArx, Te’Kwon Dennard, Zach Covington, Chris Elliott, Isaac Brumbley, Ryan Nelson, and Tyler Wright. 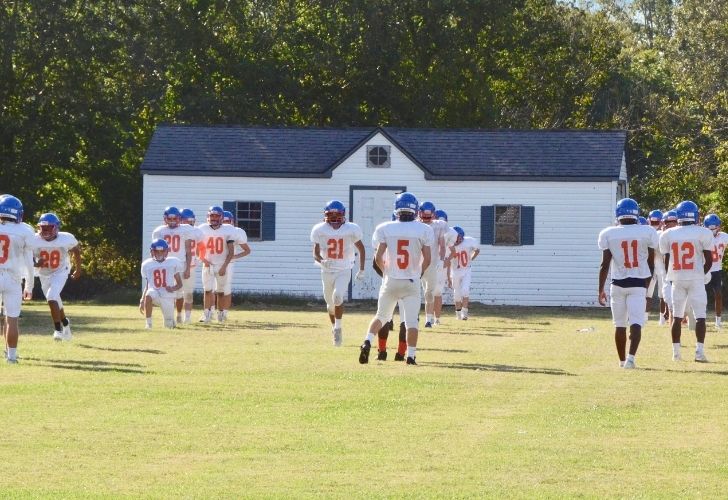 The Delmar varsity football team is shown taking part in a drill during a pre-season practice. Photo by Mike McClure

“Those types of guys you just don’t replace that easily. It’s not just playing, it’s are they going to make big plays when you need them to,” said Delmar head coach David Hearn.

The team had 80 players come out for the team including a large ninth grade class. “I hope everything stays in place and we can play ball,” Hearn said. “So far they’ve done well.”

The team has one returning starter on the offense and four to five returning starters on defense. Warner and Allen saw time on offense while Lucas, who started one game under center last year, is competing with Oakley for the starting quarterback position.

Coach Hearn expects the Henlopen South to be evenly matched. “We’re certainly not on the top of the pack. We have to find a way into the pack,” said Hearn. “I like the group that we have.”

The Wildcats open the season on Oct. 23 against Woodbridge in a game that is usually played at the end of the regular season.