The Delmar varsity field hockey team lost a pair of senior starters from last year’s team, which went 15-0 in the conference and 19-0 overall, winning the Division II state championship. The Wildcats have a large number of returning players from last season. 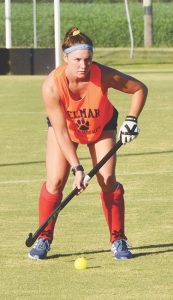 Senior Josie Hollamon, shown during a pre-season practice, is one of many returning players for the Delmar field hockey team. Photo by Mike McClure

“They can rise to the occasion as long as they stay healthy and all stay focussed,” said Delmar head coach Jodi Hollamon.

“It (being a senior) feels a little weird. I feel like we’ve always been the young ones. I’m just glad to have another year to hopefully finish strong,” Bradford said.

“I just think this year is a little more special. We’re going to play hard for our last season,” added Josie Hollamon. “Each year it’s a different group of girls. Obviously the goal is to win a state championship at the end of the year.”

“We have a good group of girls,” Bradford said. “It’s just learning our expectations and working hard.”

Coach Hollamon said all of her players know the team’s expectations coming into the season. Being perennial state champions puts a target on the Wildcats’ backs.

“You just have to be focussed every game,” said Coach Hollamon.

Hollamon expects Cape Henlopen, Smyrna, and Newark Charter to be among the top teams in the state. She sees Lake Forest and Sussex Academy, which made a big run in the state tournament, as her team’s top rivals in the Henlopen South.